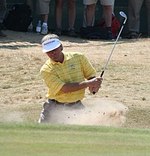 Frederick Steven Couples (born October 3, 1959) is an American professional golfer who has competed on the PGA Tour and the PGA Tour Champions. A former World No. 1, he has won 64 professional tournaments, most notably the Masters Tournament in 1992, and the Players Championship in 1984 and 1996. More about Fred Couples

Current items with a signature of Fred Couples

These are the most current items with a signature of Fred Couples that were listed on eBay and on other online stores - click here for more items.

Traded items with a signature of Fred Couples

The most expensive item with a signature of Fred Couples (1997 Masters Flag signed by Fred Couples) was sold in May 2008 for $1030.00 while the cheapest item (FRED COUPLES, HAND-SIGNED PRO SET Golf Card) found a new owner for $0.88 in November 2010. The month with the most items sold (40) was April 2009 with an average selling price of $20.24 for an autographed item of Fred Couples. Sold items reached their highest average selling price in February 2022 with $199.00 and the month that saw the lowest prices with $0.99 was September 2016. In average, an autographed item from Fred Couples is worth $29.99.

Most recently, these items with a signature of Fred Couples were sold on eBay - click here for more items.

Woods names Stricker, Couples, Johnson as Presidents Cup assistants (02/13/19): MELBOURNE - First-time US Presidents Cup captain Tiger Woods on Wednesday named the experienced Fred Couples, Steve Stricker and Zach Johnson as three of his assistants for the showdown against the International team in Melbourne later this year.

Fred Couples witnessed Tiger Woods make hole-in-one in front of son Charlie - Go (02/13/19): When you're close friends with Tiger, as Couples is, you get the opportunity to witness some extraordinary things.

Fred Couples witnessed Tiger Woods make hole-in-one in front of son Charlie - Go (02/2019): When you're close friends with Tiger, as Couples is, you get the opportunity to witness some extraordinary things.

Fred Couples at the Straight Down Fall Classic (11/2014): An opportunity to see the pros play at San Luis Obispo Country Club.

Keegan Bradley: We need Fred Couples as Ryder Cup captain (10/2014): The Americans are fresh off losing the Ryder Cup and are already talking about their team captain for Hazeltine National in 2016. Here's the full story.

Seattle native Fred Couples to host a sports show on satellite radio (09/2014): “The Fred Couples Show” will debut on SiriusXM PGA Tour on Sept. 25 (XM channel 93, Sirius channel 208), the night before the Ryder Cup begins. Along with being a Masters champion, former No. 1 player in the world and a member of the World Golf Hall of Fame, Couples is a renowned sports

Fred Couples-Steve Ballmer and Rick Neuheisel-Mitch Levy will compete in Snoqual (07/2014): Four local celebrities will golf for charities at TPC Snoqualmie Ridge at 2 p.m. on Aug. 4.

Fred Couples returning for Saskatoon charity golf tournament (03/2014): Golf legend Fred Couples is coming back to Saskatoon for his second year to raise money for the Children’s Hospital of Saskatchewan.

Fred Couples raises the 12th man flag at Seahawks vs. Saints (12/2013): Golf legend and Seattle native "Boom Boom" gets the honor of firing up the home crowd prior to a huge MNF party. ESPN's Mike Tirico called him one of the greatest athletes ever born in the Seattle area.

Lesson in humanity courtesy Fred Couples and his new young friend (08/2013): Of the thousands of spectators who lined the first hole at Canyon Meadows for Fred Couples' opening shot Friday, none were as adoring as the mop-topped kid with the new green shoes and the ear-to-ear grin.

Senior Open 2013: Fred Couples welcomes the return to 'normal' golf after 'concr (07/2013): Fred Couples defends his Senior Open title at Royal Birkdale relieved to have turf under his feet again.

Ron Cook: 'Cool' Fred Couples is a big draw (06/2013): The right guy is leading the Constellation Seniors Players Championship after three rounds, with Fred Couples atop the leader board.

Fred Couples thrives at Riviera (02/2013): Rusty though he was after playing very little golf for five months, Fred Couples once again found form at his beloved Riviera Country Club in the Northern Trust Open on Thursday.

SCOTTSDALE, Ariz. -- Defending champion Jay Don Blake was back on top in the Cha (11/2012): Blake birdied three of the final four holes for a 6-under 64 and a one-stroke lead Thursday in the Charles Schwab Cup Championship. Last year, he won at TPC Harding Park in San Francisco.

U.S. Presidents Cup captain Fred Couples has plans for Jason Dufner in 2013 (10/2012): Fred Couples, an assistant on Davis Love III's Ryder Cup staff, will coach the U.S., while Nick Price will coach the International team in 2013.

Fred Couples planning for rare golf walkoff (04/2012): AUGUSTA, Ga. — This is the plan for Fred Couples. He wins the Masters, which at the age of 52 would make even the magnolia trees shake at Augusta. He puts on the green jacket, waves to the world and never plays in another golf tournament the rest of his life.

Fred Couples says he feels best he has in years, will play in Boeing Classic (02/2012): Seattle native says he feels much percent better this year, thanks to Anatabloc, a new anti-inflammatory pill he is taking. He also received treatment in Germany for his back.

Harig: Timing of Fred Couples' decision the real issue (09/2011): For all those who will chide Fred Couples' selection of Tiger Woods as a Presidents Cup captain's pick, it's not about the who, but more so the when of the decision, writes ESPN.com's Bob Harig.

New Hope for Fred Couples and Others: Regenokine Treatment Helped Couples Win PG (08/2011): LOS ANGELES, Aug. 31, 2011 /PRNewswire/ -- Gold legend Fred Couples, who won the prestigious PGA Senior Players Championship on Sunday, despite being sidelined on-and-off for the past five years with a debilitating arthritic back condition, revealed that the secret to his success was a...

Fred Couples has cancerous lesions removed from hands (05/2011): Citing back problems and skin-cancer treatment on his hands, Seattle native Fred Couples has withdrawn from the Senior PGA Championship.

Fred Couples withdraws from Legends event (04/2011): Ongoing back issues force him to the sidelines; Victoria's Jim Rutledge joins the field