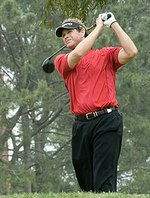 Lee McLeod Janzen (born August 28, 1964) is an American professional golfer who is best known for winning the U.S. Open twice in 1993 and 1998. More about Lee Janzen

Current items with a signature of Lee Janzen

These are the most current items with a signature of Lee Janzen that were listed on eBay and on other online stores - click here for more items.

Traded items with a signature of Lee Janzen

The most expensive item with a signature of Lee Janzen (Lee Janzen's Bubble Driver-Signed with Important History) was sold in December 2015 for $200.00 while the cheapest item (Lee Janzen Signed 2002 Upper Deck #129 Card PGA Tour Golf Masters Auto Au) found a new owner for $0.49 in June 2022. The month with the most items sold (8) was June 2022 with an average selling price of $3.45 for an autographed item of Lee Janzen. Sold items reached their highest average selling price in December 2015 with $200.00 and the month that saw the lowest prices with $0.97 was December 2017. In average, an autographed item from Lee Janzen is worth $5.00.

Most recently, these items with a signature of Lee Janzen were sold on eBay - click here for more items.

Lee Janzen, at ACE Group Classic, seeks easy move to Champions Tour (02/12/15): Lee Janzen is making his Champions Tour debut in Naples after enjoying much success in southwest Florida over the years.

My Favorite Course: Lee Janzen (09/2014): Professional golfer Lee Janzen discusses his experiences on the golf course and growing up.

Orlando's Father/Son golf challenge is special for PGA Tour stars such as Lee Ja (12/2013): Spend even a few moments around PGA golfer Lee Janzen and his 20-year-old son, Connor, and it doesn't take long to notice the deep admiration and respect the two share. Just don't mention the word basketball.

Wrong Footwear Costs Lee Janzen at Qualifier (06/2013): The two-time United States Open champion Lee Janzen was knocked out of this year’s qualifying for wearing metal spikes at a golf course that does not allow them.