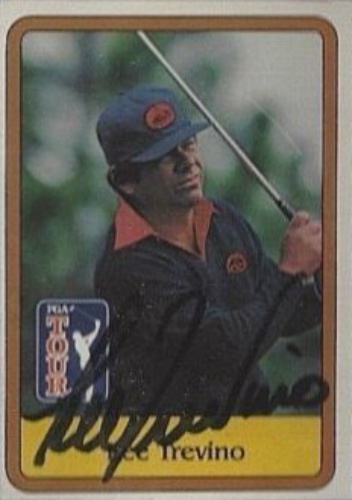 Lee Buck Trevino (born December 1, 1939) is an American retired professional golfer who is regarded as one of the greatest players in golf history. He was inducted to the World Golf Hall of Fame in 1981. Trevino won six major championships and 29 PGA Tour events over the course of his career. He is one of only four players to twice win the U.S. Open, The Open Championship and the PGA Championship. The Masters Tournament was the only major that eluded him. He is an icon for Mexican Americans, and is often referred to as "The Merry Mex" and "Supermex," both affectionate nicknames given to him by other golfers. More about Lee Trevino

Current items with a signature of Lee Trevino

These are the most current items with a signature of Lee Trevino that were listed on eBay and on other online stores - click here for more items.

Traded items with a signature of Lee Trevino

The most expensive item with a signature of Lee Trevino (Collectible Autographed Photo with Arnold Palmer Greg Norman Lee Trevino) was sold in April 2014 for $900.00 while the cheapest item (Lee Trevino Signed Autographed Golf Ball) found a new owner for $0.01 in November 2009. The month with the most items sold (18) was May 2008 with an average selling price of $9.24 for an autographed item of Lee Trevino. Sold items reached their highest average selling price in December 2013 with $110.00 and the month that saw the lowest prices with $1.99 was June 2010. In average, an autographed item from Lee Trevino is worth $12.49.

Most recently, these items with a signature of Lee Trevino were sold on eBay - click here for more items.

HSBC: LatAm Legend Lee Trevino Heads to São Paulo to Support Golf in Brazil (03/10/15): International golf sponsor HSBC is bringing LatAm legend Lee Trevino to Brazil as it steps up its commitment to the nation’s preparation for Rio 2016.

TRAFFIC ALERT: Traffic backed up on I-10 near Lee Trevino (10/2014): El Paso emergency crews have responded to a traffic incident along I-10 West near Lee Trevino. TxDOT traffic cameras showed the right lane completely closed off around 2:30 Sunday afternoon. 0 0 read more

Pedestrian accident reported at Lee Trevino and Edgemere (08/2014): The El Paso Police Department is responding to an accident at Edgemere Blvd. and Lee Trevino Drive in East El Paso.

Lee Trevino showed he really belongs at the U.S. Open (06/2013): A RDMORE, Penn. – The most appealing feature with major championships today is the bringing back of former champions, who are available for interviews and who cavort with the fans who enjoy casual conversations with the past winners.

Yahoo: Lee Trevino wishes he would have never done his 'Happy Gilmore' cameo (05/2013): For golfers, "Happy Gilmore" is one of the sacred films of our time here on Earth, a mix of ridiculousness, golf and long drives that few real sports fans pass up if they see it while scrolling the channels on a weeknight.

Traffic exiting at I-10 and Lee Treviño, portion of freeway closed due to motorc (06/2012): A reported motorcycle accident is causing a traffic back-up tonight on Interstate 10 in far East El Paso.

25 YEARS OF CHAMPIONS TOUR IN NAPLES: Lee Trevino does it again in 1991 (01/2012): NAPLES -- Both the weather and Lee Trevino saved their best act for the last show Sunday.And each was near perfect.

1971 was Lee Trevino's year: The El Paso golfer won US, Canadian and British nat (07/2011): Sometimes -- some very special times -- the stars are aligned, the gods of talent and the gods of hard work join hands and something magical happens.

Questions for... Lee Trevino (06/2011): Trevino captured six major championships during his storied career. You've retired, but you're still playing a ton of golf, right? My son, Daniel, who is 18 and graduates high school this year, decided last August that he wanted to switch from lacrosse to golf. I'm training him.

Construction Begins On Lee Trevino (02/2011): El Paso Water Utilities stated that the construction will be overnight, but there will be lane closures throughout the length of the project.