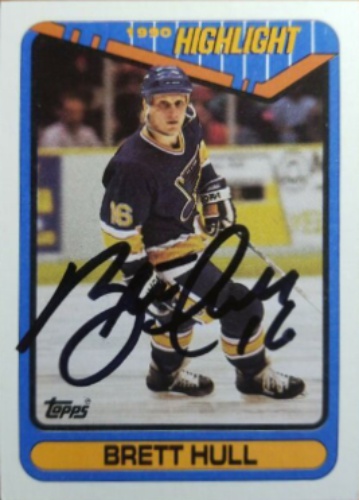 Brett Andrew Hull (born August 9, 1964) is a Canadian–American former ice hockey player and general manager, and currently an executive vice president of the St. Louis Blues of the National Hockey League (NHL). He played for the Calgary Flames, St. Louis Blues, Dallas Stars, Detroit Red Wings and Phoenix Coyotes between 1986 and 2005. His career total of 741 goals is fifth highest in NHL history, and he is one of five players to score 50 goals in 50 games. He was a member of two Stanley Cup winning teams – 1999 with the Dallas Stars and 2002 with the Detroit Red Wings. In 2017 Hull was named one of the '100 Greatest NHL Players' in history. More about Brett Hull

Current items with a signature of Brett Hull

These are the most current items with a signature of Brett Hull that were listed on eBay and on other online stores - click here for more items.

Traded items with a signature of Brett Hull

If you're interested in Brett Hull Rookie cards you might want to take a look at our sister site that specializes in Hockey Rookie Cards only.

Most recently, these items with a signature of Brett Hull were sold on eBay - click here for more items.

Brett Hull set to reach another milestone (08/03/14): Hall of Famer turns 50 on Saturday. Gretzky, Shanny, Pronger and others reminisce about the man, the mouth and more.

The Time Brett Hull Stole His Coach's Jaguar To Party All Night (01/2014): Brett Hull stories are the best. Drinking, partying, half-assing it on the ice—you could make up a Brett Hull story right now and I'd believe it, just because his escapades have reached that rarified air where "authentic" matters more than "true." But here's a true one! Read more...

What can we expect from Brett Hull in the front office? (09/2013): On Monday night, the St. Louis Blues made it official. Late last week, rumors swirled and later sources confirmed that the all-time leading goal scorer in the history of the organization would be returning to St. Louis in a front-office role.

PHT Morning Skate: Brett Hull just can’t leave Buffalo alone (10/2012): Wonder what the sound of an entire fan base smashing their computer is like?

New Blues ownership might mean a gig for Brett Hull (05/2012): They do seem to lack an "Ambassador of Fun."

Brett Hull Trolls Sabres Fans (10/2011): Former NHLer Brett Hull hopped on the Twitter train just over 10 days ago and he's kinda been a little bit awesome since doing so. One of the Golden Brett's first tweets was a dig at Buffalo Sabres fans that read: "a quick hello to all my friends in Buffalo".