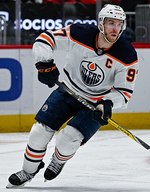 Connor McDavid (born January 13, 1997) is a Canadian professional ice hockey centre and captain of the Edmonton Oilers of the National Hockey League (NHL). The Oilers selected him first overall in the 2015 NHL Entry Draft. More about Connor McDavid

Current items with a signature of Connor McDavid

These are the most current items with a signature of Connor McDavid that were listed on eBay and on other online stores - click here for more items.

Traded items with a signature of Connor McDavid

If you're interested in Connor McDavid Rookie cards you might want to take a look at our sister site that specializes in Hockey Rookie Cards only.

Most recently, these items with a signature of Connor McDavid were sold on eBay - click here for more items.

Wyshynski's Hockey Hall of Fame Tiers: Why Connor McDavid is already a lock (11/17/22): Which current players will make the Hall when they hang it up? We break 'em down into five categories of candidates.

Center preview: Where to put Zegras, Aho on your draft board (09/07/22): Sean Allen previews the center position across the NHL ahead of the 2022 fantasy hockey season, including stars like Connor McDavid, Trevor Zegras, Sebastian Aho and more.

Avalanche beat Oilers 4-2 to take 3-0 series lead (06/2022): Pavel Francouz took J.T. Compher off the hook for a penalty with a key save on Connor McDavid. A few seconds later, Compher took the life out Rogers Place — and put the Colorado Avalanche on the cusp of the Stanley Cup Finals. Compher came out of the penalty box to give Colorado the lead with 7:18

Stunning numbers: Another 100-point season for Connor McDavid (03/2022): Connor McDavid has hit the 100-point mark for already the fifth time in his career and has put himself in some pretty exclusive company.

Connor McDavid back atop the scoring race (02/2022): The Week Ahead looks at the resurgence of Connor McDavid and the return to the regular schedule of the NHL after rescheduling games lost to COVID (Mark J. Rebilas-USA TODAY Sports)

Hart History: McDavid unanimous choice for MVP (06/2021): Edmonton forward Connor McDavid, who authored a 105-point campaign in a shortened season for the high-flying Oilers, won the Hart Trophy Tuesday night, given to the NHL's most valuable player.

How to stop Connor McDavid -- or at least delay the inevitable (05/2021): Coming off a record-setting regular season, the Oilers superstar will be a focal point of the Jets' defensive efforts.

NHL Awards Watch: Projecting the races with a month left (04/2021): Can anyone catch Connor McDavid for the Hart Trophy as league MVP? Here are our early-April projections for all the major awards.

Oilers' Connor McDavid hit with $5,000 maximum fine for elbow on Canadiens' Jesp (03/2021): The incident happened in a 4-0 loss against Montreal

How Connor McDavid is helping to keep kids fit during coronavirus isolation (04/2020): Without P.E. class and recess, staying active can get a bit boring for kids. The Oilers superstar is looking to change that.

Sign him up! Connor McDavid using bernedoodle Leonard to stay in game shape (03/2020): McDavid is doing his part to spread the "stay home, stay safe" message, making use of his dog as his new training partner.

Oilers star Connor McDavid out 2-3 weeks with quad injury (02/2020): McDavid is second in the league to teammate Leon Draisaitl with 81 points

Two-man wrecking crew is fueling Oilers (11/2019): However bad the Oilers' roster is from players Nos. 3-23, Nos. 1 and 2 – Connor McDavid and Leon Draisaitl – are so good that it simply might not matter.

Red Wings beat Oilers 3-1 to end 8-game losing streak (10/2019): Dylan Larkin scored and led a defensive effort to slow down Connor McDavid. Larkin and Patrik Nemeth had goals in the first period, and the Detroit Red Wings defeated the Edmonton Oilers 3-1 Tuesday night to end an eight-game losing streak. Larkin had the challenge of being on the ice when McDavid

The struggle is real: Why hockey butts, jeans don't mix (01/2019): The drawback to a muscular posterior? It's tough to find a pair of jeans that will fit. Connor McDavid and other NHL stars chronicle the struggle.

Checking in on the Connor McDavid sweepstakes (03/2015): ERIE, Pa. — Connor McDavid’s future is being determined every night in the NHL. Points won and lost will eventually turn to NHL draft lottery percentages, and one lucky team will win the chance to select the 18-year-old phenom. McDavid […]

Connor McDavid’s play at world juniors further separates him from rest of NHL dr (01/2015): TORONTO — Connor McDavid was already the front-runner to go first overall in the NHL draft. Now he’s even further ahead of the rest of the group. With his performance for Canada at the world junior championship, McDavid separated himself […]

Connor McDavid’s ‘Dumb’ Decision To Fight Won’t Hurt Draft Status (11/2014): The OHL’s Connor McDavid is the NHL’s top prospect and likely will be the No....

Connor McDavid on potentially being drafted by Sabres: 'It would be an awesome s (08/2014): Erie Otters phenom Connor McDavid, the likely first overall pick at the 2015 NHL Entry Draft, is the most highly regarded prospect in hockey. He's probably the most hyped teenager in nearly a decade.

PHT Morning Skate: Did Sabres sign themselves out of Connor McDavid? (07/2014): Wednesday's delectable spread of links.

Q&A: 2015 NHL top prospect Connor McDavid (06/2014): Numerous players could have been selected first overall in the NHL Entry Draft over the weekend. That won’t be the case next year, when Connor ...