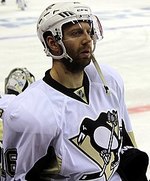 Eric Fehr (born September 7, 1985) is a Canadian professional ice hockey centre who is currently playing under contract with Ak Bars Kazan in the Kontinental Hockey League (KHL). He was drafted in the first round, 18th overall, by the Washington Capitals in the 2003 NHL Entry Draft. In addition to two separate stints with Washington, Fehr has also played in the National Hockey League (NHL) for the Winnipeg Jets, Pittsburgh Penguins (with whom he won the Stanley Cup in 2016), Toronto Maple Leafs, San Jose Sharks and the Minnesota Wild. Fehr initially ended his professional career after having played two seasons with Genève-Servette HC of the National League (NL) before resuming to play in the KHL. More about Eric Fehr

Current items with a signature of Eric Fehr

These are the most current items with a signature of Eric Fehr that were listed on eBay and on other online stores - click here for more items.

Traded items with a signature of Eric Fehr

The most expensive item with a signature of Eric Fehr (ERIC FEHR Washington Capitals Winter Classic SIGNED Hockey Stick w/ COA) was sold in July 2013 for $99.99 while the cheapest item (ERIC FEHR WASHINGTON CAPITALS SIGNED AUTOGRAPHED CARD) found a new owner for $0.45 in October 2011. The month with the most items sold (11) was April 2011 with an average selling price of $6.99 for an autographed item of Eric Fehr. Sold items reached their highest average selling price in July 2013 with $51.99 and the month that saw the lowest prices with $0.45 was October 2011. In average, an autographed item from Eric Fehr is worth $7.95.

Most recently, these items with a signature of Eric Fehr were sold on eBay - click here for more items.

Caps Insider: For Eric Fehr, faceoff success is ‘when you start believing that y (01/29/15): Fehr won 77 percent of his draws in the 4-0 rout over the Penguins, including 13 of 17 against Sidney Crosby.

Caps Insider: On pace for career-high numbers, Eric Fehr has ‘settled in’ at cen (01/12/15): After shuttling across three lines to start the season, Fehr has spent 19 of the past 20 games between Brooks Laich and Joel Ward, and has now recorded points in six of seven.

Eric Fehr, a 2011 Winter Classic star, and Capitals hope for encore against Blac (01/01/15): WASHINGTON - When he was playing hockey on the pond of his family farm in Manitoba, Eric Fehr dreamed of winning a Stanley Cup.

Eric Fehr was 2011 Winter Classic hero and Washington Capitals are hoping for an (12/31/14): ARLINGTON, Va. — Eric Fehr always wanted to win the Stanley Cup. That’s what he dreamt of when playing hockey on the pond on his family’s farm in Winkler, Man. Fehr didn’t wonder what it would be like to play […]

LOVERRO: Former Winter Classic hero Eric Fehr ready for Capitals' outdoor showca (12/2014): ANALYSIS/OPINION: Eric Fehr knew the Washington Capitals were about to play in something kind of different when they took the ice at Heinz Field for the 2011 New Year's Day NHL Winter Classic against the Pittsburgh Penguins. It was a regular-season game — yet it felt like some sort of ...

Caps Insider: After game-winner, Eric Fehr tries to stay ‘even keel’ during ‘tou (11/2014): Barry Trotz explained his deployment of Fehr by saying he wants the forward "to be going through some of those difficulties"

Caps Insider: Versatile forward Eric Fehr offers utility option for Trotz, Capit (09/2014): Capable of playing all three forward spots on all four lines, Fehr has given the Capitals comfort in his versatility

NHL roundup: Eric Fehr scores a pair as Capitals down Predators (09/2013): Eric Fehr had two goals and Mikhail Grabovski had three assists as the Washington Capitals earned a 4-1 victory over the Nashville Predators on Wednesday.