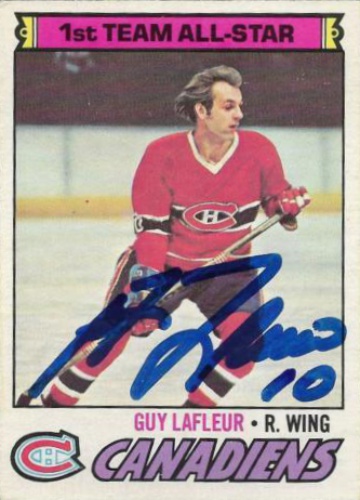 Guy Damien Lafleur OC CQ (September 20, 1951 – April 22, 2022), nicknamed "the Flower" and "Le Démon Blond", was a Canadian professional ice hockey player. He was the first player in National Hockey League (NHL) history to score 50 goals in six consecutive seasons as well as 50 goals and 100 points in six consecutive seasons. Between 1971 and 1991, Lafleur played right wing for the Montreal Canadiens, New York Rangers, and Quebec Nordiques in an NHL career spanning 17 seasons, and five Stanley Cup championships in 1973, 1976, 1977, 1978, and 1979 (all with the Canadiens). Lafleur was named one of the 100 Greatest NHL Players in history in 2017, and was named to the Order of Hockey in Canada in 2022. More about Guy Lafleur

Current items with a signature of Guy Lafleur

These are the most current items with a signature of Guy Lafleur that were listed on eBay and on other online stores - click here for more items.

Traded items with a signature of Guy Lafleur

If you're interested in Guy Lafleur Rookie cards you might want to take a look at our sister site that specializes in Hockey Rookie Cards only.

Most recently, these items with a signature of Guy Lafleur were sold on eBay - click here for more items.

Guy Lafleur dies and hockey world grieves (04/22/22): The hockey community grieved together, sharing messages of condolences and honoring the memory of the Canadiens legend.

Hockey Hall of Famer Guy Lafleur dies at age 70 (04/22/22): Hockey Hall of Famer Guy Lafleur, who helped the Montreal Canadiens win five Stanley Cup titles in the 1970s, has died at age 70. The No. 1 pick in the 1971 NHL draft, Lafleur registered 518 goals and 728 assists in 14 seasons with Montreal. With the flashy forward leading the way, the Canadiens w

Guy Lafleur, Canadiens legend and Hockey Hall of Famer, dies at 70 (04/22/22): Lafleur was a five-time Stanley Cup champion with the Canadiens.

From the archives 2005: Top 10 Habs - No. 3 Guy Lafleur: Born to wear the CH on (12/2014): Guy Lafleur could electrify an audience like no other player with his speed and shot and was on five Stanley Cup teams

Abbotsford Heat to host Guy Lafleur at AHL home opener (09/2013): Abbotsford Heat fans will get a little taste of the NHL on Oct. 11, the night of the AHL team’s home opener, when retired hockey legend Guy Lafleur tales part in the first Legends of Hockey night for the 2013-14 season at the Abbotsford Entertainment and Sports Centre.

Jets could still make NHL playoffs, says Guy Lafleur (04/2013): With the Winnipeg Jets about to take to the ice tonight, in their last game of the NHL's regular season, one hockey star thinks the team still has a chance to make the playoffs.

Guy Lafleur comes to the oval for Hockey Day (02/2013): Local hockey fans got to see a legend today as Montreal Canadiens great Guy Lafleur is at the Richmond Olympic Oval for Richmond Celebrates Hockey Day.

Guy Lafleur to visit for Hockey Day in Canada (12/2012): Hockey legend Guy Lafleur is expected to meet fans in Richmond as part of the second annual Hockey Day in Richmond. City council approved spending $76,500 to help host the Feb. 9, 2013 event, which will see the Montreal Canadiens’ great sign autographs for fans at the Richmond Olympic Oval.

Guy Lafleur's son pleads guilty to multiple charges (02/2012): Mark Lafleur, the troubled son of hockey legend Guy Lafleur, pleaded guilty this week to several charges related to his second arrest at a bar in less than a year.

Hockey legend Guy Lafleur ends playing days with Quebec City game (02/2011): QUEBEC - On the day Guy Lafleur played his last game, another NHL great spoke about the league's possible return to Quebec City. Lafleur was overcome with emotion Sunday as he took one final lap around the Pepsi Colisee after an alumni game between Montreal Canadiens and Quebec Nordiques.

Guy Lafleur visting Utopia today: News Briefs (12/2010): LAFLEUR VISITING UTOPIA ESSA TWP. -- Hockey Hall of Famer Guy Lafleur will be in Utopia today to lend his support to the Bell's Gristmill preservation project. To recognize the Friends of the Utopia Gristmill and Park, the former Montreal Canadiens winger will visit the mill and Utopia Hall.[...]