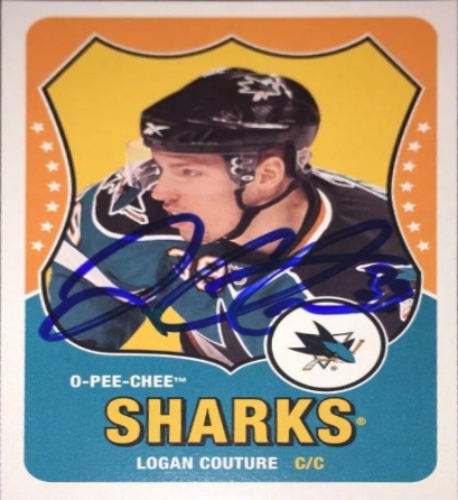 Logan Couture (born March 28, 1989) is a Canadian professional ice hockey centre and captain for the San Jose Sharks of the National Hockey League (NHL). He was drafted by the Sharks ninth overall in the 2007 NHL Entry Draft, where he established himself as one of the best Stanley Cup playoff performers of his generation. More about Logan Couture

Current items with a signature of Logan Couture

These are the most current items with a signature of Logan Couture that were listed on eBay and on other online stores - click here for more items.

Traded items with a signature of Logan Couture

If you're interested in Logan Couture Rookie cards you might want to take a look at our sister site that specializes in Hockey Rookie Cards only.

Most recently, these items with a signature of Logan Couture were sold on eBay - click here for more items.

Sharks' Logan Couture, Erik Karlsson saying little on Evander Kane situation (01/12/22): The Sharks didn't make much of a statement regarding Evander Kane's termination, and their star plays got the message loud and clear.

Rankings update: Is it time to drop Logan Couture or Tyler Toffoli? (04/20/21): Sean Allen's rest of season rankings, and with the schedule coming to a close, here's who you should drop or hold on to.

Sharks optimistic Couture's injury not serious (03/09/20): Timo Meier hit teammate Logan Couture in the side of the head with the puck. Coach Bob Boughner said after Sunday's game that he's optimistic Couture could play on Wednesday.

Sharks' Couture sidelined with fractured ankle (01/09/20): Sharks captain Logan Couture is expected to miss up to six weeks with a fractured left ankle,

Sharks center Couture helped off ice with injury (01/2020): Sharks center Logan Couture was helped off the ice with an apparent knee injury in the second period of Tuesday's game and did not return.

Sharks topple Golden Knights 2-1 in overtime (11/2019): Logan Couture isn’t always following the calendar enough to know who’s next on the San Jose Sharks’ schedule. "I can barely remember who we play the next game," Couture said. This was the first meeting of the Pacific Division rivals since Vegas swept a home-and-home set to open the regular

Sharks forward Logan Couture turns columnist to share insights on top centers (01/2015): Web site founded by Derek Jeter recruiting athletes themselves to do the writing and Couture took advantage of the opportunity

Logan Couture makes speedy recovery from illness to score 2 goals in Sharks 6-4 (11/2014): SAN JOSE, Calif. — Logan Couture scored twice after missing the morning skate with an illness, and the San Jose Sharks snapped a four-game losing streak by holding off the Anaheim Ducks 6-4 on Saturday night.

Logan Couture: Why his hockey mom is special (05/2014): Logan Couture on his mom, Lori: "I definitely wouldn't be where I am today, as an NHL player and as a person, without her." / Robert Stanton, USA TODAY Sports

Sharks' Logan Couture returns to lineup (03/2014): Forward Logan Couture was back in the San Jose Sharks' lineup Thursday after a one-game absence as the Sharks played the Winnipeg Jets at home

Slumping Sharks won't rush back Logan Couture (01/2014): Logan Couture won't be rushed back into the lineup, but with just five goals in five games and three straight losses, it is clear the San Jose Sharks could use a certain jolt with four games left before the Olympic break beginning on Feb. 8.

Logan Couture scores twice to lead San Jose Sharks past Montreal Canadiens (10/2013): Couture got his second of the game in San Jose's 2-0 victory when a third period dump-in took an inexplicable bounce

PHT Morning Skate: Where Logan Couture is ready for the Super Bowl (02/2013): He's even "Kaepernicking" too. That and the links to start your day ahead.

San Jose Sharks star Logan Couture to play in Switzerland (09/2012): Couture will play there until NHL lockout is resolved

Logan Couture might use Jeff Skinner’s contract in future talks (08/2012): That won't come up for a while, though.