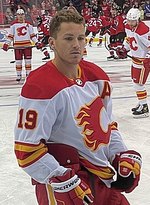 Matthew Tkachuk (/kəˈtʃʌk/; born December 11, 1997) is an American professional ice hockey winger and alternate captain for the Calgary Flames of the National Hockey League (NHL). Tkachuk was selected sixth overall at the 2016 NHL Entry Draft by the Flames. More about Matthew Tkachuk

Current items with a signature of Matthew Tkachuk

These are the most current items with a signature of Matthew Tkachuk that were listed on eBay and on other online stores - click here for more items.

Traded items with a signature of Matthew Tkachuk

Most recently, these items with a signature of Matthew Tkachuk were sold on eBay - click here for more items.

Wing preview: Big opportunity ahead for Tyler Toffoli (09/08/22): Sean Allen previews the left and right wing position across the NHL ahead of the 2022 fantasy hockey season, including stars like Matthew Tkachuk, Chris Kreider, Tyler Toffoli and more.

Ranking the NHL's top 10 wingers: Panthers' Matthew Tkachuk surges to top after (09/07/22): These can fill the back of the net or take on the role of facilitator.

Top signings of the 2022 NHL offseason: Johnny Gaudreau, Matthew Tkachuk among g (08/19/22): Each of these players will have a massive impact on the 2022-23 season and beyond

Panthers welcome Matthew Tkachuk, the latest big move of the summer (07/25/22): The easiest thing for Florida would have been to maintain the status quo, especially after posting the NHL's best record. The Panthers went a different way.

New Florida Panther Tkachuk: 'I hate Tampa now' (07/2022): Matthew Tkachuk, who was traded by the Calgary Flames to the Florida Panthers in a blockbuster deal Friday night, said Monday, "I hate Edmonton, but I hate Tampa more now."

Flames star Matthew Tkachuk sends shoutout to young Oilers fan battling brain ca (05/2022): Some things are bigger than hockey or the Battle of Alberta between Calgary and Edmonton. A five-year-old Oilers super fan is undergoing treatment for glioblastoma and he's got a new supporter, even if it's on the other side the rivalry.

High-scoring Gaudreau powering Calgary Flames into playoffs (04/2022): Johnny Gaudreau's career-high 37th goal was a thing of a beauty, a circular skate around the offensive zone, capped by a perfectly placed shot into the side of the net. Gaudreau could always play, from growing up in New Jersey to breaking into the NHL, but he has reached a different level this year

Previewing the Flames: Why Matthew Tkachuk will be the most hated player in Cana (01/2021): Calgary is part of the all-Canadian North Division, and the 23-year-old agitator is sure to get under everyone else's skin.