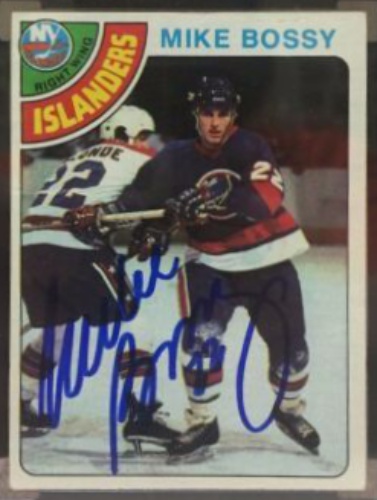 Michael Dean Bossy (January 22, 1957 – April 15, 2022) was a Canadian professional ice hockey player with the New York Islanders of the National Hockey League. He spent his entire NHL career, which lasted from 1977 to 1987, with the Islanders, and was a crucial part of their four consecutive Stanley Cup championships in the early 1980s. More about Mike Bossy

Current items with a signature of Mike Bossy

These are the most current items with a signature of Mike Bossy that were listed on eBay and on other online stores - click here for more items.

Traded items with a signature of Mike Bossy

If you're interested in Mike Bossy Rookie cards you might want to take a look at our sister site that specializes in Hockey Rookie Cards only.

Most recently, these items with a signature of Mike Bossy were sold on eBay - click here for more items.

Mike Bossy, Islanders great, 4-time Cup champion, dies at 65 (04/15/22): Mike Bossy, one of hockey’s most prolific goal-scorers and a star for the New York Islanders during their 1980s Stanley Cup dynasty, has died after a battle with lung cancer. TVA Sports, the French-language network in Canada where he worked as a hockey analyst, confirmed Bossy died Thursday night.

Former Islanders star Mike Bossy announces that he has been diagnosed with lung (10/2021): Bossy helped guide the Islanders to four consecutive Stanley Cups in the early 1980s

Mike Bossy: Islanders can win Stanley Cup in ‘surreal’ season (01/2015): Mike Bossy was yet again in the bowels of Nassau Coliseum, shaking his head with something resembling disbelief as he thought about the first half of the Islanders season. “I have...

Fighting in the NHL is a losing game: Mike Bossy (11/2014): PITTSBURGH — The moment 17-year-old wunderkind Connor McDavid threw down in that Ontario Hockey League fight on Tuesday and suffered a broken hand for his trouble, I wondered what Mike...

Islanders’ Mike Bossy, Part 3: The Young And The Restless (06/2011): Mike Bossy was cautious when asked about what he thinks Garth Snow’s game plan will be. He took a wait-and-see approach, but also emphasized that it takes two to tango when it comes to acquiring talent.