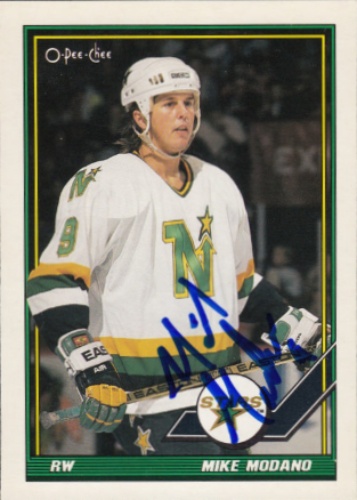 Current items with a signature of Mike Modano

These are the most current items with a signature of Mike Modano that were listed on eBay and on other online stores - click here for more items.

Traded items with a signature of Mike Modano

If you're interested in Mike Modano Rookie cards you might want to take a look at our sister site that specializes in Hockey Rookie Cards only.

The most expensive item with a signature of Mike Modano (MIKE MODANO 00'01 Signed Dallas Stars NHL Game Used Hockey Stick COA) was sold in June 2022 for $599.99 while the cheapest item (Mike Modano signed 1990 Topps ROOKIE card STARS) found a new owner for $0.01 in February 2011. The month with the most items sold (19) was September 2020 with an average selling price of $49.00 for an autographed item of Mike Modano. Sold items reached their highest average selling price in May 2014 with $155.00 and the month that saw the lowest prices with $0.99 was May 2009. In average, an autographed item from Mike Modano is worth $19.99.

Most recently, these items with a signature of Mike Modano were sold on eBay - click here for more items.

Dominik Hasek, Mike Modano inducted into Hockey Hall of Fame (11/17/14): Hasek is one of the best goalies in hockey history.

Red Wings recall former teammate Mike Modano as he prepares to enter Hall of Fam (11/16/14): Modano ended his career with the Red Wings in 2010-11, scoring four goals in 40 games before retiring after 21 NHL seasons.

Gosselin: Fact that Mike Modano was Stars' homegrown talent makes Hall of Fame n (06/2014): The fact that Modano played the most and best years of his career in Dallas makes his nomination even more special for local fans.

VIDEO Mike Modano on end of Stars' season (04/2014): Dallas Stars legend Mike Modano talks with WFAA's Joe Trahan about the end of the team's 2014 quest for the Stanley Cup.

Stars Great Mike Modano With Ben & Skin (10/2013): Former Dallas Stars center, and DFW legend Mike Modano calls in to the Ben and Skin show to discuss the Dallas Stars and to take a run at the Terrifying Ten.

Mike Modano, fiancee Allison Micheletti bonding on the golf course (07/2013): If you catch The American Century Celebrity Golf Championship at Lake Tahoe on television this weekend (2-5 p.m. Saturday and Sunday on NBC Sports), you might notice that Mike Modano has a special caddie -- his fiance Allison Micheletti.

Mike Modano tops list of new US Hockey Hall of Famers (10/2012): DALLAS - Mike Modano made his mark long before he and the Minnesota North Stars relocated to Dallas and brought...

Willa Ford, 'I Wanna Be Bad' Singer, Divorces Mike Modano (08/2012): Willa Ford and husband of five years Mike Modano who got married in Athens, Texas, People reported, are getting divorced.

Mike Modano intrigued by NHL comeback after injury-plagued finish with Red Wings (07/2012): Modano played in only 40 games and had four goals and 11 assists in his only season in Detroit in 2010-11.

Mike Modano America's most important player of all-time (05/2012): With the retirement of an American legend, Ryan Kennedy argues why Mike Modano was so influential in the growth of the game. -

Mike Modano is going as a mid-life crisis for Halloween (10/2011): Apparently playing in the NHL kept Mike Modano from posting some really weird photos on Twitter.

Audio: NHL Star Mike Modano Talks About The American Century Championship (07/2011): Longtime NHL veteran Mike Modano sat down with Grant in Lake Tahoe to discuss, among other things, the joy of being at Edgewood. Filed under: Golf, Grant Napear, Heard On KHTK, Hockey, Sports, Watch + [...]

Longtime foe Mike Modano adjusts to life as Red Wing (12/2010): Some people spend decades wishing they could go back home. Mike Modano was not one of those people.