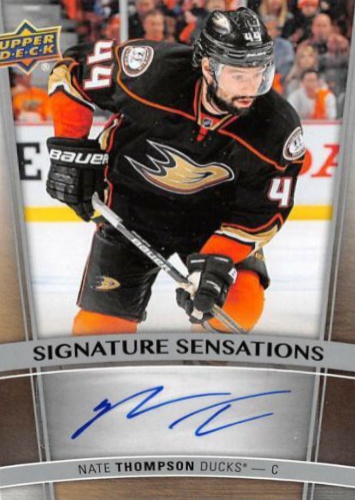 Nathan Scott Thompson (born October 5, 1984) is an American professional ice hockey forward currently signed to a professional tryout with the Los Angeles Kings. He most recently played for the Philadelphia Flyers of the National Hockey League (NHL). He has previously played for the Boston Bruins, New York Islanders, Tampa Bay Lightning, Anaheim Ducks, Ottawa Senators, Los Angeles Kings, Montreal Canadiens and Winnipeg Jets. The Bruins drafted him in the sixth round (183rd overall) at the 2003 NHL Entry Draft. More about Nate Thompson

Current items with a signature of Nate Thompson

These are the most current items with a signature of Nate Thompson that were listed on eBay and on other online stores - click here for more items.

Traded items with a signature of Nate Thompson

The most expensive item with a signature of Nate Thompson (Nate Thompson Game Used Team signed Stick with Hologram COA Tampa Bay Lightning) was sold in April 2013 for $199.99 while the cheapest item (Nate Thompson Winnipeg Jets Montreal canadiens SIGNED 8x10 Anaheim ducks) found a new owner for $0.50 in July 2021. The month with the most items sold (3) was April 2009 with an average selling price of $5.00 for an autographed item of Nate Thompson. Sold items reached their highest average selling price in April 2013 with $199.99 and the month that saw the lowest prices with $0.99 was November 2011. In average, an autographed item from Nate Thompson is worth $5.00.

Most recently, these items with a signature of Nate Thompson were sold on eBay - click here for more items.

Flyers' Thompson out 2 weeks with knee sprain (03/11/20): Flyers forward Nate Thompson has a sprained knee that will sideline him for at least two weeks.

Flyers add Grant, Thompson for stretch run (02/24/20): Philadelphia has acquired Derek Grant from the Anaheim Ducks for forward Kyle Criscuolo and a fourth-round draft pick. The Flyers also got center Nate Thompson from the Canadiens for a 2021 fifth-round pick.

Nate Thompson delivers game-winner for Letchworth (07/2012): Letchworth’s Sam Shearing (5) slides into home plate as Nunda pitcher Colton Davis applies a tag, during the fourth-inning of Monday’s Ted King Memorial tourney at Fred Kemp Field in Arkport. Shearing was ruled safe on a questionable call and Letchworth went on to win, 10-0.