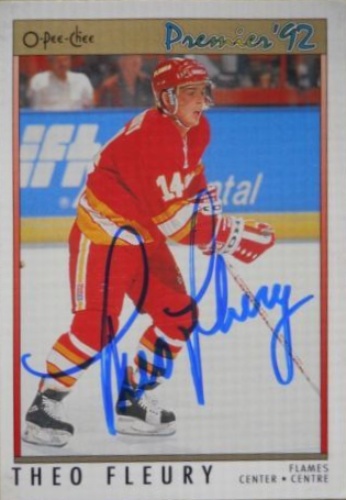 Theoren Wallace "Theo" Fleury (born June 29, 1968) is a Canadian former professional ice hockey player, author, and motivational speaker. Fleury played for the Calgary Flames, Colorado Avalanche, New York Rangers, and Chicago Blackhawks of the National Hockey League (NHL), Tappara of Finland's SM-liiga, and the Belfast Giants of the UK's Elite Ice Hockey League. He was drafted by the Flames in the 8th round, 166th overall, at the 1987 NHL Entry Draft, and played over 1,000 games in the NHL between 1989 and 2003. More about Theo Fleury

Current items with a signature of Theo Fleury

These are the most current items with a signature of Theo Fleury that were listed on eBay and on other online stores - click here for more items.

Traded items with a signature of Theo Fleury

The most expensive item with a signature of Theo Fleury (Theo Fleury Autographed Calgary Flames Fanatics Jersey (AJ COA and Hologram)) was sold in May 2021 for $356.02 while the cheapest item (THEO FLEURY AUTOGRAPHED CALGARY FLAMES CARD RANGERS) found a new owner for $0.75 in May 2012. The month with the most items sold (16) was May 2011 with an average selling price of $0.99 for an autographed item of Theo Fleury. Sold items reached their highest average selling price in May 2021 with $356.02 and the month that saw the lowest prices with $0.99 was August 2010. In average, an autographed item from Theo Fleury is worth $10.00.

Most recently, these items with a signature of Theo Fleury were sold on eBay - click here for more items.

Theo Fleury's plan to better support mental health (03/01/21): The 52-year-old has taken up the cause to help others that are struggling, working to erase the stigma that he feels still exists.

Playing with Fire follows Theo Fleury’s life from victim to victor (03/03/15): Theo Fleury’s incredible story of survival is played out onstage in Playing with Fire, a one man play based on his autobiography that portrays his troubled home life, years of sexual abuse that led to alcohol and drug addictions, and how he was able to turn his life around.

Colin MacLean: Playing With Fire: The Theo Fleury Story is outstanding (01/30/15): Theoren Fleury was a feisty little guy who came out of Saskatchewan in the '80's and forged his way through the NHL playing for New York, Colorado and Chicago and probably, most notably, for the Calgary Flames.

Former NHL star Theo Fleury stops by mayor’s office to talk hockey, mental healt (01/2015): A day after millions texted and Tweeted to raise funds and awareness around mental health, Theo Fleury said the internet became a “safe place” for their stories but the conversation needs to continue in the days and months to come. … Continue Reading

Strang: Theo Fleury wants you to give Gary Bettman a break (10/2014): Never one to hold back, the former star goes off on Bettman haters, homophobes

Theo Fleury shares tales of therapy, healing at workshop in Barrie (04/2014): • Presented by New Path Foundation, Fleury and Barthel will speak at Georgian Theatre May 1 from 9 a.m. to 4 p.m. • Tickets are $195 each plus HST, with beverage breaks and lunch provided.

Theo Fleury to speak in Merritt Thurs. (02/2014): This Thursday, Merritt will be visited by a former NHL All-Star, Stanley Cup champion and Olympic gold medalist.

Theo Fleury, Joel Plaskett to judge NHIC Song Quest (10/2013): The puck drops Saturday night in a nation-wide contest to find Canada’s next great hockey song. CBC-TV's Hockey Night In Canada along with CBC Music are launching Song Quest, a competition to find a new pop or rock song that reflects the game of hockey,

Theo Fleury helps daughters of poor family pay for hockey (08/2013): Thanks to a little help from Theo Fleury, a pair of underprivileged girls will be able to lace up their skates this year.

Theo Fleury helped change society's view of child sex abuse victims (07/2013): Child molesters typically teach their victims to keep quiet, either through threats or rewards, and that silence often carries on into adulthood.

Theo Fleury: Long recovery ahead from Calgary flood (06/2013): Former NHL star Theo Fleury tells Hockey Night in Canada Radio host Rob Pizzo and co-host David Amber that the recovery period from the Calgary flood will be a long one.

Victor Walk: Theo Fleury calls for healing after 'life-changing' trek (05/2013): After a 10-day walk from Toronto to Ottawa, former NHLer Theo Fleury says he has talked with the government about the need for tougher laws against child sex abuse, but doubts much will change.

Former Flame Theo Fleury records song for new album (11/2012): Theo Fleury has given and taken his share of hits after more than 1,000 games in the NHL, but he hopes he's got plenty more left in him.

Calgary critics pick Theo Fleury story as best play (08/2012): A group of Calgary theatre critics have picked Playing with Fire: The Theo Fleury Story as the best production of the year.

Theo Fleury Story scores theatre award nominations (07/2012): The one-man play based on the story of hockey player Theo Fleury – titled Playing with Fire – has six nominations, including a nod for best production, for the Betty Mitchell Awards.