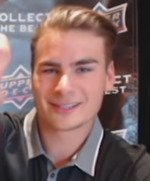 Timo Meier (born 8 October 1996) is a Swiss professional ice hockey player for the San Jose Sharks of the National Hockey League (NHL). At the 2015 NHL Entry Draft, he was selected by the Sharks with the ninth overall pick. He made his NHL debut in 2016. Internationally Meier has played for the Swiss national team at two World Championships, winning a silver medal in 2018. More about Timo Meier

Current items with a signature of Timo Meier

These are the most current items with a signature of Timo Meier that were listed on eBay and on other online stores - click here for more items.

Traded items with a signature of Timo Meier

Most recently, these items with a signature of Timo Meier were sold on eBay - click here for more items.

Sharks' Timo Meier avoided major injury after scary collision vs. Flames (03/23/22): The Sharks dodged a major bullet regarding Timo's health after his scary collision on Tuesday.

Meier delivers epic 5-goal performance (01/18/22): Timo Meier scored five of the Sharks' six goals vs. the Kings. Even more impressive was that he was able to do so in just 11:38 minutes of ice time through the first two frames.

Meier's shootout goal gives Sharks 2-1 win over Predators (11/2019): Timo Meier saw an opening, and the San Jose Sharks' forward took advantage. Meier scored in the seventh round of the shootout and the Sharks beat the Nashville Predators 2-1 on Saturday night. ''I was just reading off the goalie and I saw that far side was open,'' Meier said.