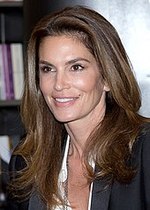 Cynthia Ann Crawford (born February 20, 1966) is an American model, actress, and television personality. During the 1980s and 1990s, she was among the most popular supermodels and an ubiquitous presence on magazine covers, runways, and fashion campaigns. She subsequent expanded into acting and business ventures. More about Cindy Crawford

Current items with a signature of Cindy Crawford

These are the most current items with a signature of Cindy Crawford that were listed on eBay and on other online stores - click here for more items.

Traded items with a signature of Cindy Crawford

The most expensive item with a signature of Cindy Crawford (Sexy Cindy Crawford Signed 11x14 Supermodel PSA/DNA) was sold in August 2019 for $300.00 while the cheapest item (CINDY CRAWFORD Autographed Signed 8x10 Photo NM in hard plastic case) found a new owner for $3.00 in March 2019. The month with the most items sold (29) was March 2021 with an average selling price of $18.50 for an autographed item of Cindy Crawford. Sold items reached their highest average selling price in August 2018 with $129.99 and the month that saw the lowest prices with $6.45 was June 2019. In average, an autographed item from Cindy Crawford is worth $21.14.

Most recently, these items with a signature of Cindy Crawford were sold on eBay - click here for more items.

Cindy Crawford dons leather pants in Malibu (02/13/19): It's unclear whether the nineties supermodel - toting a red box - was getting an early start to Valentine's Day celebrations or her 53rd birthday, which happens in a week

The 15 Beauty Products to Steal From Cindy Crawford's Glam Routine (02/08/19): Including the $8 drugstore mascara the model swears by.

Cindy Crawford, 49, Flashes Nipples During Sexy Beach Photo Shoot—See the Gorgeo (03/24/15): Seriously? Cindy Crawford is, without a doubt, a timeless beauty. The 49-year-old supermodel proved that she's still got it (in case anyone had any question otherwise) by flaunting...

Cindy Crawford Ditches Her Bra While Modeling a Completely Sheer Dress on the Be (03/24/15): It takes a village—unless you're Cindy Crawford! The 49-year-old supermodel was snapped looki[...]

Cindy Crawford Gets Her Very Own Barbie Doll: See It (03/2015): Cindy took to her Instagram on Monday to debut her very own Barbie doll in her likeness, which comes dressed in one of her favorite designers , Roberto Cavalli. The doll features her brunette hair, brown eyes, and of course, her signature mole.

Cindy Crawford's Daughter Wears Her Dresses, Taylor and Karlie Team Up & More Ce (10/2014): These stars are having twice the fun

Cindy Crawford has withdrawn her children from school (08/2014): Cindy said: "I don't feel 100 percent safe.... "I look 10 years down the line. What if my kid, God forbid, had a problem?. How could I live with myself if I knew that it was a possibility and I still sent them to school there?"

Cindy Crawford: How I Look 20 Years Younger Than My Age (06/2014): Cindy Crawford has defied aging as her skin remains amazingly flawless despite the passage of twenty years since the start of her modeling days.

Cindy Crawford celebrates anniversary (05/2014): Cindy Crawford says her wedding to Rande Gerber ''feels like yesterday'' despite the fact they have been married for 16 years.

Cindy Crawford pays tribute to National Siblings Day with family photo (04/2014): The 48-year-old proved she had supermodel looks even as a child by sharing a throwback picture of herself, her two sisters Danielle and Chris and her brother Jeff.

Cindy Crawford posts racy Twitter picture in backless swimsuit and shows every c (03/2014): We've seen our fair share of celebrities attempt to pose like only Cindy Crawford can. But now the stunning model has blown every attempt out the water with THIS.

Cindy Crawford accidentally got into bed with George Clooney. (02/2014): The 48-year-old supermodel stars in a commercial for Casamigos tequila - a brand owned by the actor and her husband Rande Gerber - in which her spouse catches her between the sheets with the 'Monuments Men' star and she admits the funny advert was inspired by a real-life encounter.

Harry Styles went to Cindy Crawford's house to make pizzas with her kids. (09/2013): The One Direction hunk stopped by the supermodel and her husband Rande Gerber's abode in Malibu, California, to make ham and pineapple pizzas with her son Presley, 14, and 11-year-old daughter Kaia, but his secret stay was revealed when Presley posted a picture of their cooking session on Instagram.

Cindy Crawford Talks Body Image: Some Days Nothing Fits (05/2013): Despite looking like she bathes in the fountain of youth on a regular basis, Cindy Crawford admits she has insecurities like everyone else. "I'm a normal woman, sometimes I feel...

Cindy Crawford: Daughter Moves From Modeling To Acting (04/2013): Cindy Crawford’s daughter Kaia is just eleven, but she’s already following in her famous mom’s footsteps. The pre-teen landed a modeling gig with Versace Children last year, but Crawford cut the job short, saying her daughter was too young. “At …

Cindy Crawford displays her endless legs as she soaks up the sun with her husban (03/2013): The 47-year-old supermodel showed off the incredible body that helped her become 1995's most highly paid supermodel in the world.

Anna Dello Russo: 'I felt like a mouse, especially in front of Cindy Crawford' (02/2013): Anna Dello Russo has gone from mousey magazine slave to the Elvis of the blogosphere. We report from inside her changing room.

Cindy Crawford caught in bed with George Clooney in new advert - video (01/2013): Crawford, Clooney and their partners end up in bed together thanks to tequila.

Cindy Crawford's husband thinks she is still the world's most beautiful woman. (11/2012): The 46-year-old supermodel has been married to entrepreneur Rande Gerber - with whom she has children Presley, 13, and 10-year-old Kaia - for 14 years and he says he considers himself to be extremely lucky to have married her every day.

Cindy Crawford shows off furniture collection at Novi Art Van (09/2012): Cindy Crawford relaxes on one of the chairs in her furniture line while at Art Van Furniture store in Novi, pictured Thursday.

Hardworking supermodel Cindy Crawford designs AND models for C&A as she unveils (08/2012): As a founding member of the supermodel club and one of the most successful clothes horses of all time you could forgive Cindy Crawford for hanging up her Jimmy Choos and taking it easy.