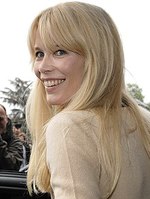 Claudia Maria Schiffer (German: (listen); born 25 August 1970) is a German model, actress, and fashion designer who is based in the United Kingdom. She rose to fame in the 1990s as one of the world's most successful models, quickly attaining supermodel status. In her early career, she was compared to Brigitte Bardot. More about Claudia Schiffer

Current items with a signature of Claudia Schiffer

These are the most current items with a signature of Claudia Schiffer that were listed on eBay and on other online stores - click here for more items.

Traded items with a signature of Claudia Schiffer

Most recently, these items with a signature of Claudia Schiffer were sold on eBay - click here for more items.

Taxpayer bill for David Cameron to wine and dine Claudia Schiffer and others rev (02/20/15): David Cameron’s dinners at Chequers with amongst others supermodel Claudia Schiffer, Tory Chairman Lord Feldman, and the Queen cost taxpayers nearly £1,900 it has been revealed.

Claudia Schiffer designs knitwear collection (02/2015): Claudia Schiffer has designed a capsule collection for Tse. The 44-year-old supermodel has teamed up with the knitwear label to produce a line of 17 cashmere and wool-blend pieces, including dresses, cardigans, sweaters, pants and capes in a variety of weights and stitches, reports WWD.

Claudia Schiffer Makes a Sizzling Red Carpet Return After a Four-Year Hiatus (01/2015): Seriously, does this woman ever age?

Kim Kardashian, Claudia Schiffer, and Suki Waterhouse to auction clothes for cha (11/2014): Ever wanted a sneak peek in to the wardrobes of Hollywood A-listers, fashion icons and notable designers?

Rafa Benitez says Napoli's transfer business like upgrading his wife for supermo (07/2014): Rafa Benitez attempted to put a funny spin on Napoli's struggles in the transfer market in order to quell fan discontent.

D&G Casts Claudia Schiffer As '90s Supers Make A Fashion Comeback (06/2014): Claudia Schiffer has just been unveiled as the star behind Dolce & Gabbana's AW14 stunning ad campaign and, in true D&G form, it's certainly something to behold.

Claudia Schiffer's home wrecked by fire, officials say (05/2014): Together we can make a confident retirement possible. Simply click to get started with your private wealth advisor. Talk to Jimmy Scotchie, Certified Financial Planner.

Claudia Schiffer didn't party during the 90s when she found fame. (01/2014): The 43-year-old model insists she was "innocent" and didn't really embrace the rock 'n' roll lifestyle like many other models did, and instead she chose to go home after fashion shows.

MiH jeans loved by Claudia Schiffer and Jessica Alba launch service that lets sh (06/2013): The British-based brand has teamed up with artisan embroiderers Hawthorne & Heaney to let you pick fonts and text colours.

Could you follow in Claudia Schiffer's footsteps? Guess launches talent search 2 (04/2013): The U.S. fashion brand is on the lookout for its next leading lady - and this time around no modeling credentials are needed.

Claudia Schiffer 's younger sister (03/2013): They didn't herald a breakthrough, but three fashion shows last week confirmed a feeling that the local fashion scene has recently been abuzz with activity.