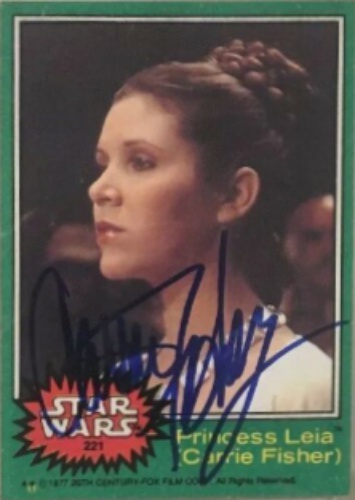 Carrie Frances Fisher (October 21, 1956 – December 27, 2016) was an American actress and writer. She played Princess Leia in the Star Wars films (1977–1983), a role for which she received four Saturn Award nominations. She reprised the role in Star Wars: The Force Awakens (2015), Star Wars: The Last Jedi (2017)—a posthumous release that was dedicated to her—and appeared in Star Wars: The Rise of Skywalker (2019) through the use of unreleased footage from Star Wars: The Force Awakens. Fisher's other film credits include Shampoo (1975), The Blues Brothers (1980), Hannah and Her Sisters (1986), The 'Burbs (1989), When Harry Met Sally... (1989), Soapdish (1991), and The Women (2008). She was nominated twice for the Primetime Emmy Award for Outstanding Guest Actress in a Comedy Series for her performances on the television series 30 Rock (2007) and Catastrophe (2017). More about Carrie Fisher

Current items with a signature of Carrie Fisher

These are the most current items with a signature of Carrie Fisher that were listed on eBay and on other online stores - click here for more items.

Traded items with a signature of Carrie Fisher

The most expensive item with a signature of Carrie Fisher (Carrie Fisher Signed 11x14 STAR WARS Official Pix Photo w COA Princess Leia AUTO) was sold in February 2021 for $4550.00 while the cheapest item (Mark Hamill And Carrie Fisher Signed shirt) found a new owner for $0.01 in June 2021. The month with the most items sold (94) was December 2019 with an average selling price of $87.97 for an autographed item of Carrie Fisher. Sold items reached their highest average selling price in December 2020 with $362.00 and the month that saw the lowest prices with $2.95 was August 2015. In average, an autographed item from Carrie Fisher is worth $99.95.

Most recently, these items with a signature of Carrie Fisher were sold on eBay - click here for more items.

Billie Lourd Opens Up About Mom Carrie Fisher’s Amazing Sense Of Humor And What (09/20/22): Growing up as the daughter of Carrie Fisher couldn't have been easy but it was likely hilarious.

Carrie Fisher’s Daughter Billie Lourd Discusses One Of The ‘Touching’ Ways Her W (05/22/22): Fresh off her recent wedding, Billie Lourd shares how she paid tribute to her mom whilst tying the knot.

Carrie Fisher's Daughter Billie Lourd Got Married This Week, And Her Dress Honor (03/19/22): Billie Lourd's custom wedding dress held a special significance when it comes to her late mother.

Evangeline Lilly Wanted to Play Princess Leia, But Carrie Fisher Already Had It (02/2019): Evangeline Lilly actively asked to be a part of a project one time, and one time only. It was when she found out J.J. Abrams was making a new Star Wars movie.

Carrie Fisher: Richie Sambora and Orianthi Set to Help Honor the ‘Star Wars’ Act (09/2014): Carrie Fisher, who played Princess Leia in Star Wars episodes 4-6, is one of four who will be honored at the Midnight Mission‘s Golden Heart Gala, which will feature performances by Bon Jovi star Richie Sambora and acclaimed guitarist Orianthi. …

Carrie Fisher on Robin Williams: "He Was the Opposite of Selfish" (08/2014): The actress tells THR she was blown away by her longtime friend's charisma and the way in which he absorbed his surroundings

Carrie Fisher Dishes on 'Star Wars' Reunion (05/2014): Carrie Fisher opens up about filming the new "Star Wars" movie with her former co-stars -- and what she did with the infamous gold bikini.

Relapse Fears For Carrie Fisher: ‘Star Wars’ Star Denies ‘Buying Drugs’ From Sha (02/2014): Is Carrie Fisher still chained to a monster ? The New York Post , in the wake of a weeklong investigation, reports that the Tinseltown stalwart was witnessed pulling up… READ ON

Today's News: Our Take - Carrie Fisher Heads to Legit (10/2013): Carrie Fisheris heading to FXX'sLegit,TVLinereports.Fisher will guest-star in an upcoming episode of the comedy as Angela Greenberg, a top comedy development executive in Hollywood.Bubble Shows: Which will survive?Her character is impressed after seeing a stand-up set by Jim (Jim Jeffries) ...

Carrie Fisher on her return to Star Wars (04/2013): We all know by now that the original Star Wars trio of Mark Hamill, Harrison Ford and Carrie Fisher are returning to the next movie in the series, which is currently due for release in 2015. read more

Carrie Fisher Describes Her Bipolar Crisis (03/2013): After a manic episode on a cruise ship lands her in a psychiatric hospital, the star is back on solid ground

Carrie Fisher’s ‘Trashed’ Cruise Performance Was Due To Bipolar Disorder, Not Bo (02/2013): Actress and writer Carrie Fisher was briefly hospitalized this week, just days after a video of her appearing “trashed and incoherent” during a cruise performance went viral.

Carrie Fisher Clarifies Her Comment on Returning to New 'Star Wars' (11/2012): After causing frenzy for allegedly confirming her return as Princess Leia in 'Episode 7', Fisher sends his rep to clarify that her statement is just 'tongue-in-cheek.'