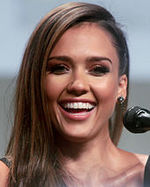 Jessica Marie Alba (/ˈælbə/ AL-bə; born April 28, 1981) is an American actress and businesswoman. She began her television and movie appearances at age 13 in Camp Nowhere and The Secret World of Alex Mack (1994), and rose to prominence at age 19 as the lead actress of the television series Dark Angel (2000–2002), for which she received a Golden Globe nomination. More about Jessica Alba

Current items with a signature of Jessica Alba

These are the most current items with a signature of Jessica Alba that were listed on eBay and on other online stores - click here for more items.

Traded items with a signature of Jessica Alba

Most recently, these items with a signature of Jessica Alba were sold on eBay - click here for more items.

Jessica Alba says acting is like a "vacation" (03/27/15): She said: "Acting is totally the easy job. It's like vacation! It's also something I have been doing for so long. "It's difficult because you have to be open and vulnerable and in the moment.

Jessica Alba Dons Barely-There White Bikini During Tropical Vacation With Husban (03/26/15): Jessica Alba has clearly never met a bikini that didn't agree with her! The stunning actress was spotted on holiday with her hubby, Cash Warren, in the Caribbean earlier today and...

Jessica Alba on living life to the fullest (03/26/15): Jessica Alba has revealed sticking to a healthy diet and exercising is helping her to live life to ''its fullest''.

Jessica Alba Dons Barely-There White Bikini During Tropical Vacation With Husban (03/2015): Jessica Alba has clearly never met a bikini that didn't agree with her! The stunning actress was spotted on holiday with her hubby, Cash Warren, in the Caribbean earlier today and...

Nicole Miller: Smokey Eyes & Sleek Ponys Like Jessica Alba (02/2015): The look at Nicole Miller’s Fall 2015 Fashion Show was classic and chic — and one we’ve seen and will continue to see on the red carpet.

Jessica Alba is sexed up in new Sin City sequel trailer - watch (12/2014): New 60-second teaser for Sin City: A Dame to Kill For is released.

Anne Hathaway, Jessica Alba and More Stars Are Stylishly Fighting Hunger (11/2014): This stylish campaign gives back in a big way

Jessica Alba 'too independent' to stay at home (08/2014): Jessica Alba still enjoys starring in movies since having two children because she wants to set a good example for her daughters Honor, six, and two-year-old Haven, and admits she is too independent to be a stay-at-home mother.

Jessica Alba Covers September Issue Of Maxim (07/2014): Actress Jessica Alba is 33 years old and a mother of two, but is still one bad woman... and shows it off for the pages of the September issue of Maxim . "I'm really comfortable in my own skin. And I'm not apologizing for myself," she tells the mag.

Jessica Alba Dishes About Her Career, Family and Health (06/2014): Jessica Alba’s definitely a celebrity. The Spy Kids: All the Time in the World actress is no stranger to the spotlight and red carpets. However, there’s two very special little people that are near and dear to the 33-year-old actress that …

Jessica Alba wishes her daughter would act her age. (03/2014): The 'Machete' actress claims her five-year-old daughter, Honor, loves to wear "dresses and high heels" and while she admires her daughter's enthusiasm for fashion, she thinks the tot should be spending her time playing outside like she did growing up.

Jessica Alba: My Daughter Honor Ate Her Diaper When She Was a Baby (01/2014): Diaper disaster! Jessica Alba learned the hard way that babies will put pretty much anything in thei[...]

Jaime King, Jessica Alba Wear Christmas Pajamas In Wacky Holiday Photo: Picture (12/2013): Because, why not? Jaime King and her famous pal Jessica Alba went all out for Christmas with their significant others. As the two actresses celebrated the holiday together, they both posed for a hilarious photo wearing some very wacky pajamas.

Jessica Alba Can't Live Without Her Ombré Hair For Even One Week (09/2013): The star went slightly darker - then back to blonde in just a few days

And Now, a Sneak Preview of Jessica Alba's Hot Photo Shoot for Editorialist (08/2013): Another one for the seriously-hot-moms books

Jessica Alba, Michelle Obama and Huma Abedin All Wear Identical ASOS Checkered D (07/2013): Michelle Obama first snapped up the figure-flattering frock in 2011 and wore it on numerous occasions - most famously when her husband was re-elected last fall.

Jessica Alba parties with pro basketball players at Catch (06/2013): Jessica Alba took some time off from mommy duties and hit New York’s night life with a group of NBA pros. After attending the...

Jessica Alba Celebrates 32nd Birthday With Cash Warren, Gwen Stefani, Rachel Zoe (04/2013): Jessica Alba rang in her 32nd year the best way she knew how -- in the company of close family and friends for a night out on the town, followed by a relaxing spa day at home on Sunday, Apr. 28.

Blake Lively, Jessica Alba , and the new era of celebrity homemakers (03/2013): Actresses who don't work very much are all emulating Martha -- and sometimes it doesn't quite ring true

Jessica Alba And Cash Warren Kiss in the Park (02/2013): One of Hollywood's cutest couples is squeezing in a little bit of romance—at a public park of all places. Jessica Alba and Cash Warren recently took an afternoon trip to a Los...

Is it time for Caroline Flack and Jessica Alba to upgrade their ¿dos? Hair veili (12/2012): Next season's must-have styles have been revealed and the craze for splashes of colour goes one step further as hair-veiling and colour-flipping become the must-have hair dos.

Windows 8 phone software launch: Microsoft hopes Jessica Alba will help it take (10/2012): Windows Phone 8 is set to appear on handsets within weeks, and has a similar interface to the firm's new desktop and tablet software.

Jessica Alba: 'I wish I could clone myself' (09/2012): Jessica Alba is a young, hot Hollywood mom who not only juggles her career with motherhood, but also finds time to help the environment. At the Environmental Media Awards in Burbank, Calif., Alba talked to Wonderwall about balancing business with pleasure, going green and staying blond.

Jessica Alba to Be Honored for Living the Green Life (08/2012): Jessica Alba is getting a second Mother's Day this year. The Sin City starlet and mom of two will be honored at the upcoming Environmental Media Awards with the inaugural EMA Green...

Jessica Alba - Jessica Alba Enjoys A Day Break In New York With Her Kids (07/2012): Shes a busy person is that Jessica Alba but the 31 year-old still found time to have a day out with her kids in New York looking every inch the doting mother with four year-old Honor and 11 month-old Haven at the Hudson River Park Alba is currently...