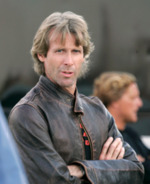 Michael Benjamin Bay (born February 17, 1965) is an American film director and producer. He is best known for making big-budget, high-concept action films characterized by fast cutting, stylistic cinematography and visuals, and extensive use of special effects, including frequent depictions of explosions. The films he has produced and directed, which include Armageddon (1998), Pearl Harbor (2001) and the Transformers film series (2007–present), have grossed over US$7.8 billion worldwide, making him one of the most commercially successful directors in history. More about Michael Bay

Current items with a signature of Michael Bay

These are the most current items with a signature of Michael Bay that were listed on eBay and on other online stores - click here for more items.

Traded items with a signature of Michael Bay

The most expensive item with a signature of Michael Bay (The Island Cast Signed 27X40 Movie Poster Ewan McGregor Michael Bay 5 TOTAL!) was sold in February 2020 for $300.00 while the cheapest item (MICHAEL BAY TRANSFORMERS ORIGINAL & VINTAGE IN-PERSON SIGNED CARD) found a new owner for $3.25 in June 2019. The month with the most items sold (2) was February 2020 with an average selling price of $160.00 for an autographed item of Michael Bay. Sold items reached their highest average selling price in February 2021 with $249.99 and the month that saw the lowest prices with $3.25 was June 2019. In average, an autographed item from Michael Bay is worth $20.00.

Most recently, these items with a signature of Michael Bay were sold on eBay - click here for more items.

Michael Bay’s Ambulance Budget Was Nearly $200 Million Less Than His Last Transf (04/08/22): Believe it or not, Michael Bay's Ambulance cost nearly $200 million less than Transformers: The Last Knight. Yes, you read that right.

Michael Bay Opens Up About Hollywood's Self-Absorption After Getting Asked About (04/06/22): Michael Bay had some thoughts when asked about Bad Boys collaborator Will Smith and his recent Oscars debacle.

Michael Bay’s Ambulance Will Have Wild Explosions, But He Admits He’s Unhappy Wi (03/28/22): While Michael Bay's Ambulance is filled with wild explosions (per usual), there's one aspect of the Bayhem the director is unhappy with.

Michael Bay Discusses The ‘Special Sauce’ For Crafting His Massive Movie Explosi (02/20/22): Michael Bay sheds some light on the "special sauce" he uses when developing his on-set explosions.

A James Bond Movie Holds An Explosion Record. Michael Bay Thinks It's BS (02/2022): The history of the James Bond movies have seen Guinness record-holding explosions. Director Michael Bay says at least one of them is total BS.

Michael Bay Reveals He Made One Mistake After Bad Boys: 'Boy, Was I Stupid' (01/2022): Michael Bay reveals the one mistake he made after Bad Boys, and it has to do with one of the film's most iconic elements.