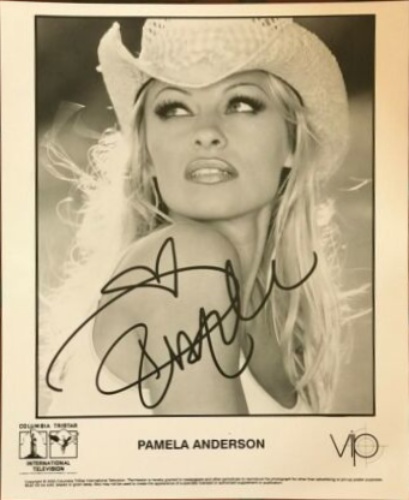 Pamela Denise Anderson (born July 1, 1967) is a Canadian-American actress and model. She is best known for her glamour modeling work in Playboy magazine and for her appearances on the television series Baywatch (1992–1997). More about Pamela Anderson

Current items with a signature of Pamela Anderson

These are the most current items with a signature of Pamela Anderson that were listed on eBay and on other online stores - click here for more items.

Traded items with a signature of Pamela Anderson

Most recently, these items with a signature of Pamela Anderson were sold on eBay - click here for more items.

‘Pamela, a Love Story’ Review: A Frank Look Back (01/31/23): This documentary from Ryan White rewinds, to powerful effect, on Pamela Anderson’s life and fame.

Pamela Anderson Clapped Back When Producers Tried To Get Her To Do The Baywatch (01/28/23): The Baywatch star says producers asked her to come back for the movie adaptation as a favor.

Pamela Anderson alleges Rick Salmon wasn't good at sex (04/03/15): Washington, Apr 4 (ANI): Pamela Anderson recently got emotional while alleging her estranged husband Rick Salomon that he wasn't good with sex and was in the relationship for fame.

Bella Thorne Opens Up About Her Relationship With Pamela Anderson's Son Brandon (03/2015): Looks like this new couple is heating up! Bella Thorne stopped by The View this morning to promote her role as the voice of Alice In Wonderland for Radio City's Spring...

Pamela Anderson doesn't feel 'pretty enough' to model (01/2015): Actress Pamela Anderson says she was never confident about her looks when it comes to modelling.

Pamela Anderson sends gifts to Aishwarya Rai, Big B, Shah Rukh, Salman and other (11/2014): Mumbai: Hollywood star Pamela Anderson seems to have a generous heart. The Baywatch actress has recently sent some of her friends in Bollywood a special gift, a vegan gift hamper along with a note extolling the virtues of a healthy diet. On the occasion to launch the 'Pamela Anderson Foundation

Pamela Anderson’s ‘Family Is Worried’ About Her Shrinking Frame — ‘She Appears T (10/2014): Pamela Anderson stepped out of the Chateau Marmont on Oct. 2 looking noticeably thinner and friends close to the 47-year-old former Baywatch beauty tell RadarOnline.com exclusively, “everyone is very worried… READ ON

Pamela Anderson May Need a Liver Transplant and More (09/2014): In other news, After suffering a heart attack in 2012, Rosie O'Donnell turned to gastric sleeve for relief. The star now says that the surgery isn't a magic bullet. New app sends the results of your latest STD test to your phone.

Pamela Anderson and five other stars who benefited from makeunders (08/2014): Stripperella has been stripped of her sexy look. Pamela Anderson has undergone a dramatic make-under for the cover of No Tofu's fall issue (the magazine goes international next month). Looking either like a living doll or a first-grader on photo … Continue reading →

Pamela Anderson: 'Malibu Might Be My Mayberry' (06/2014): Writing for THR, the actress reflects on her first house there and explains why she still calls it home. read more

Pamela Anderson's roles (05/2014): Pamela Anderson is probably best known for her role as C.J. Parker in the TV series "Baywatch." Check out some of the other roles the actress has performed.

Pamela Anderson reveals why she cut her hair short (02/2014): Pamela Anderson cut her hair so she could ... run better? In response to a query from a fan, the "Baywatch" star revealed on Sunday that she got her new pixie cut for the New York City Marathon. "Better to … Continue reading →

Pamela Anderson dresses the part (11/2013): Pamela Anderson showed up appropriately dressed in a conservative, bosom-covering dress to an event at the New York Palace to celebrate the opening of the $25,000-a-night Martin Katz Jewel Suite....

Pamela Anderson hits the beaches of Portugal (07/2013): Lisbon, July 30 (IANS/EFE) Canadian actress Pamela Anderson, known for her role in the TV series "Baywatch", spent the weekend on the tourist beaches of Algarve in southern Portugal as a guest at a birthday party.

Pamela Anderson Flaunts Under Boob in Sexy Vogue Brazil Spread (05/2013): Pamela Anderson is proving she's still sexy! In a new photo spread for Vogue Brazil, the 45-year-old blond bombshell is showing off lots of skin and her signature...

Ke$ha vs. Pamela Anderson: Who Had the Best Makeunder This Week? (04/2013): It's the battle of the blond bombshells! This week two famous fashion wild chicks opted for tame looks on the red carpet. First, Pamela Anderson debuted a toned-down look at an event...

Pamela Anderson gets second chance at skating victory in Holland (01/2013): Actress-turned-reality TV regular Pamela Anderson is heading back to the ice rink after signing up to compete in the Dutch version of hit show Dancing On Ice.

Pamela Anderson is an ice queen (12/2012): Pamela Anderson has been tipped as an early favourite to win Dancing On Ice 2013 after wowing in early rehearsals.

Pamela Anderson feeds turkeys and pigs on Thanksgiving (11/2012): London, Nov 24 (ANI): Being a tireless animal rights activist, Pamela Anderson couldn't let the turkey stuffing of Thanksgiving pass by without offering up an alternative to meat eaters.

Pamela Anderson’s ‘Dancing with the Stars’ Elimination: Did the Right Couple Go (09/2012): Sandwiched amid a sea of mirror ball winners, Pamela Anderson was a self-described "fish out of water" on "Dancing With the Stars" All-Stars. Did voters give her a fair chance? Contributor: Victoria Leigh Miller Published: Sep 26, 2012

Pamela Anderson: 'I don't know if I could handle DWTS: All-Stars win' (08/2012): The Baywatch star jokes that she'd carry the mirrorball trophy to "a lot of parties".

6. Open letter to Pamela Anderson (04/2012): Errol Oh writes a letter with a comic twist that goes a long way in showing the cynical disregard for tax bills by few who cannot justfy their negligence.

Kris Jenner, Pamela Anderson, and Other Embarrassing Celebrity Moms (11/2011): Sometimes being the offspring of a celebrity mom can be pretty tough -- after all, in some cases every guy at school can see your mother naked on the internet. But of course some celebrity moms are worse than others.

Tara Reid vs. Pamela Anderson (08/2011): REID has signed up for Celeb Big Brother - and will battle it out against Anderson