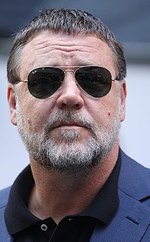 Russell Ira Crowe (born 7 April 1964) is an actor, director, and singer. He was born in New Zealand, spent 10 years of his childhood in Australia, and moved there permanently at age 21. He came to international attention for his role as Roman General Maximus Decimus Meridius in the epic historical film Gladiator (2000), for which he won an Academy Award, Broadcast Film Critics Association Award, Empire Award, and London Film Critics Circle Award for Best Leading Actor, along with 10 other nominations in the same category. More about Russell Crowe

Current items with a signature of Russell Crowe

These are the most current items with a signature of Russell Crowe that were listed on eBay and on other online stores - click here for more items.

Traded items with a signature of Russell Crowe

The most expensive item with a signature of Russell Crowe (RUSSELL CROWE SIGNED GLADIATOR ROMAN MAXIMUS HELMET AUTOGRAPH EXACT PROOF PSA) was sold in July 2016 for $1500.00 while the cheapest item (Russell Crowe Sketch Card Limited 9/50 Edward Vela Signed) found a new owner for $0.99 in August 2022. The month with the most items sold (23) was July 2020 with an average selling price of $26.55 for an autographed item of Russell Crowe. Sold items reached their highest average selling price in July 2016 with $758.75 and the month that saw the lowest prices with $2.99 was August 2015. In average, an autographed item from Russell Crowe is worth $27.00.

Most recently, these items with a signature of Russell Crowe were sold on eBay - click here for more items.

Gladiator 2 Rumor Claims Chris Hemsworth Is Maximus' Son, Will Co-Produce with R (04/06/21): A new report claims that Chris Hemsworth and Russell Crowe are working on a Gladiator sequel, which will follow the Thor star as Maximus' son.

Confirmed! Russell Crowe's 'The Water Diviner' to be released in Indian before U (04/2015): The movie stars Jai Courtney, Olga Kurylenko and Crowe himself in pivotal roles.

Russell Crowe Claims Michael Jackson Gleefully Prank Called Him - for Years (03/2015): The Oscar-winning actor says the King of Pop would track him down to make juvenile jokes over the phone

Russell Crowe film Noah banned in Indonesia (12/2014): Russell Crowe’s portrayal of religious figure Noah won’t be seen in Indonesian cinemas, with the film rejected by the censors for depicting a prophet.

Russell Crowe feud 'went too far' (09/2014): Rabbitohs legend to attend first game in a decade and vows to shake hands with actor.

Inside look at Russell Crowe's debut as Water Diviner director (04/2014): Russell Crowe has released a first-look featurette about his directing debut, The Water Diviner, a period drama that takes place in the aftermath of Gallipoli.

Russell Crowe's 'Noah' trailer: How leaked is leaked? (10/2013): The drama around Darren Aronofsky’s "Noah" was already pretty thick, what with a hurricane tearing through its set a year ago and studio and director reportedly arguing over the cut ahead of the March release.

Russell Crowe: Baby Super-poop victim on 'Man of Steel' (05/2013): BURBANK, Calif. – Russell Crowe might be a father of two, but working with babies on Man of Steel opened some new doors for him. Some of them unpleasant.