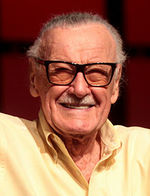 Stan Lee (born Stanley Martin Lieber /ˈliːbər/; December 28, 1922 – November 12, 2018) was an American comic book writer, editor, publisher, and producer. He rose through the ranks of a family-run business called Timely Publications which would later become Marvel Comics. He was the primary creative leader for two decades, leading its expansion from a small division of a publishing house to a multimedia corporation that dominated the comics and film industries. More about Stan Lee

Current items with a signature of Stan Lee

These are the most current items with a signature of Stan Lee that were listed on eBay and on other online stores - click here for more items.

Traded items with a signature of Stan Lee

The most expensive item with a signature of Stan Lee (AMAZING SPIDER-MAN V2 #36 CGC SS 9.8 RARE UPC NEWSTAND EDITION SIGNED STAN LEE,) was sold in December 2021 for $99000.00 while the cheapest item (STAN LEE SUPREME CUTS DIE CUT FACSIMILE AUTOGRAPH EMBOSSED SAMPLE) found a new owner for $0.06 in September 2020. The month with the most items sold (609) was December 2018 with an average selling price of $155.50 for an autographed item of Stan Lee. Sold items reached their highest average selling price in June 2018 with $604.99 and the month that saw the lowest prices with $12.38 was March 2009. In average, an autographed item from Stan Lee is worth $169.50.

Most recently, these items with a signature of Stan Lee were sold on eBay - click here for more items.

Stan Lee Way Unveiled in the Bronx (06/11/21): Stan Lee Way was officially unveiled yesterday on the street where the Marvel co-creator grew up.

Venom 2 Trailer Has a Secret Stan Lee Cameo (05/10/21): Eagle-eyed Marvel fans have spotted a Stan Lee Easter egg hidden in the new trailer for Venom: Let There Be Carnage.

Excelsior! Stan Lee & Jack Kirby Biopic Script Lands on 2020 Black List (12/15/20): Excelsior!, a script which charts the rise of Marvel legends Stan Lee and Jack Kirby, has made it onto this year's Black List.

Marvel Releases New Stan Lee Tribute (02/2019): The world has not stopped mourning comics legend, Stan Lee, ever since he passed away in [...]

Stan Lee Says ‘Black Panther’ is Still in Development (09/2014): Stan Lee has said (again) that Marvel Studios is moving forward with 'Black Panther', but when will we get official confirmation?

The Man Behind the Heroes: Stan Lee on 'The Amazing Spider-Man 2' (03/2014): At 91, the avuncular mogul is again ushering in one of his most beloved characters, Spider-Man, back to the big screen.

Stan Lee likes 'Batman' choice (09/2013): Actor Ben Affleck has won the approval of comic book legend Stan Lee as he prepares to try on the Batman suit for the "Man Of Steel" sequel.