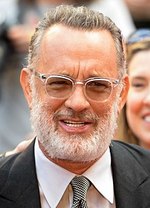 Thomas Jeffrey Hanks (born July 9, 1956) is an American actor and filmmaker. Known for both his comedic and dramatic roles, he is one of the most popular and recognizable film stars worldwide, and is regarded as an American cultural icon. Hanks's films have grossed more than $4.9 billion in North America and more than $9.96 billion worldwide, making him the fourth-highest-grossing actor in North America. More about Tom Hanks

Current items with a signature of Tom Hanks

These are the most current items with a signature of Tom Hanks that were listed on eBay and on other online stores - click here for more items.

Traded items with a signature of Tom Hanks

The most expensive item with a signature of Tom Hanks (A TOM HANKS PERSONALLY-OWNED AND SIGNED TYPEWRITER AND OTHER ITEMS.... Lot 89082) was sold in April 2018 for $2600.00 while the cheapest item (Tom Hanks Hand Signed Forrest Gump 10x8 Photo Original Autograph) found a new owner for $0.76 in January 2020. The month with the most items sold (97) was March 2020 with an average selling price of $26.99 for an autographed item of Tom Hanks. Sold items reached their highest average selling price in July 2013 with $400.00 and the month that saw the lowest prices with $2.03 was September 2014. In average, an autographed item from Tom Hanks is worth $35.00.

Most recently, these items with a signature of Tom Hanks were sold on eBay - click here for more items.

Tom Hanks Defends Casting His Son In New Movie Amid Nepo Baby Conversations (01/06/23): Tom Hanks adds his own take on the nepo baby discourse as one of his son's stars with him in latest movie.

Watch Tom Hanks Hilariously Reveal The Two Ways His Family Can Tell When He's Ex (12/23/22): Ahead of the actor playing a grump in A Man Called Otto, Tom Hanks reveals he's prone to "boiling."

Tom Hanks, Other Famous Names Targeted By Man Who Attacked Paul Pelosi With A Ha (12/15/22): Paul Pelosi's attacker had a list of prominent names on him that he intended to target after he kidnaped the Speaker of the House.

Tom Hanks Talks The ‘Casual Slaughter’ That Is Movie-Making And How Many Good Fi (09/2022): Tom Hanks talks about the “casual slaughter” of movie-making and how many good films he’s made.

Tom Hanks Addresses His Role In Philadelphia And Whether He'd Play A Gay Lead Ch (06/2022): Tom Hanks addresses whether or not he would play a gay lead role today as he did in Philadelphia.

Watch Tom Hanks Slowly Change Each Year In One Delightful Picture After Another (02/2022): Flip through the gallery to see Tom Hanks get older and stay delightfully charming.

Tom Hanks Gets Candid About One Of His Worst Movies, Explains Why It Flopped (12/2021): Tom Hanks knows that he has made plenty of outstanding movies, which makes it easier to reflect on the failures. Like this one.

Tom Hanks Has Never Gotten a Call from Marvel to Join the MCU (11/2021): Tom Hanks says he's never gotten an offer to join the Marvel Cinematic Universe and assumes they'd only want him to play a minor character.

Finch Looks Like Cast Away Meets Wall-E, and That's Fine by Me (09/2021): Aside from the two-boxes-of-tissues-minimum, who doesn't want to see the American treasure, Tom Hanks, with a furry friend and a robot on a post apocalyptic family road trip?

Tom Hanks at the Golden Globes: Don’t Be Late (01/2020): The actor, accepting the Cecil B. DeMille lifetime achievement award, spent his speech offering some advice.

‘A Beautiful Day in the Neighborhood’ | Anatomy of a Scene (11/2019): The director Marielle Heller narrates a sequence from her film featuring Tom Hanks and Matthew Rhys.

Tom Hanks Thinks Hollywood Can’t Capture America’s Current Wars (12/2018): When a Hollywood insider with his pull says that Hollywood isn't the place to tell the story that's worth noticing and unpacking.

WATCH: Tom Hanks doing impressions of Bill Belichick, Rex Ryan, Tom Coughlin (02/2015): Congratulations! Your weather is set to . You can change the location at any time. Don't have an account?

Tom Hanks in talks for cameo in Meg Ryan's Ithaca (12/2014): Ithaca is Ryan's first directorial project and will also appear in the movie.

Tom Hanks' son has undergone treatment for cocaine addiction. (11/2014): The 'Philadelphia' star and wife Rita Wilson's eldest child, 24-year-old Chester - who is also known as rapper Chet Haze - recently went to rehab to seek help for his drug problem and has now been sober for 50 days after "struggling" since he was 16.

Tom Hanks invites his cabbie to his Broadway show (10/2014): Tom Hanks is maintaining his reputation as the Nicest Man in Hollywood, even when he is taking a cab in New York City.

Tom Hanks finishes Egyptian shoot for “A Hologram for the King” (07/2014): Written and directed by Tom Tykwer, the film is adapted from Eggers' 2012 book about a struggling U.S. businessman who travels to Saudi Arabia.