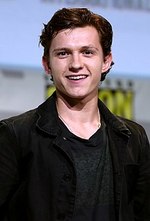 Thomas Stanley Holland (born 1 June 1996) is an English actor. His accolades include a British Academy Film Award, three Saturn Awards, a Guinness World Record and an appearance on the Forbes 30 Under 30 Europe list. Some publications have called him one of the most popular actors of his generation. More about Tom Holland

Current items with a signature of Tom Holland

These are the most current items with a signature of Tom Holland that were listed on eBay and on other online stores - click here for more items.

Traded items with a signature of Tom Holland

The most expensive item with a signature of Tom Holland (Amazing Spider-Man #1 CGC 9.8 SIGNED STAN LEE Origin retold GRR TOM HOLLAND MCU) was sold in February 2022 for $6500.00 while the cheapest item (Spider-Man’s Tom Holland Autographed 8”x10” Color Photograph) found a new owner for $0.99 in April 2020. The month with the most items sold (152) was December 2019 with an average selling price of $35.39 for an autographed item of Tom Holland. Sold items reached their highest average selling price in February 2017 with $400.00 and the month that saw the lowest prices with $8.26 was September 2017. In average, an autographed item from Tom Holland is worth $51.00.

Most recently, these items with a signature of Tom Holland were sold on eBay - click here for more items.

Zendaya’s Mom Seemingly Reacts To Those Tom Holland Engagement Rumors (12/02/22): Rumors swirled that Zendaya and Tom Holland were thinking of settling down together.

Tom Holland And Zendaya Have Been Low Key With Their Relationship, But An Inside (11/23/22): Here's what's apparently going on with Tom Holland and Zendaya's relationship after their real-life Spider-Man love story.

Zendaya Back To The Dune 2 Grind After Historic Emmys Win, But Not Before Celebr (09/15/22): Zendaya won big at the Emmy's, celebrating with her mom and Tom Holland. Now it's back to work on Dune 2.

Amy Schumer Says That Joke Everyone Thought Was About Tom Holland Wasn't About T (08/17/22): After telling a joke that people thought was directed at Tom Holland, Amy Schumer has clarified that this wasn’t the case.

How Tom Holland Skipped The Private Jet Controversy And Made A Sweet Gesture For (08/2022): Tom Holland and Zendaya are still going strong (and staying green) despite their busy shooting schedules in different countries.

Tom Holland And Other Celebrities Are All Gaga Over Zendaya's Amazing New Magazi (06/2022): Zendaya looks amazing on the cover of Vogue Italia, and Tom Holland isn't nearly the only celebrity noticing.

Zendaya Shares What It’s Like To Have The ‘Love’ And ‘Support’ Of Another Person (05/2022): Zendaya shares what it feels like to have love and support from Tom Holland.

Viral Video Of Tom Holland Going Through Airport Security Has Me Cracking Up (03/2022): Tom Holland left a TSA worker gobsmacked, and honestly, same.

‘Spider-Man: No Way Home’ Review: Listen Bud, No Spoilers Here (12/2021): In the latest installment of the “Spider-Man” series, Tom Holland faces the past and a very secure franchise future.

Tom Holland Responds to Spider-Man Fan Reactions to No Way Home Trailer (08/2021): The Spider-Man actor couldn't be around when the trailer dropped, but he was soon sharing his thoughts on his instagram stories.

TikTok of Tom Holland Wishing to Be Spider-Man Before He Was Cast Goes Viral (06/2021): A TikTok user has unearthed a clip from the red carpet of the Empire Awards 8 years ago sees Tom Holland claiming he would love to play the superhero in '10 years time.'

Spider-Man: No Way Home Main Villain Revealed? (05/2021): A new report suggests that Tom Holland's Spider-Man will have his hands full in No Way Home.

Tom Holland's Uncharted Release Date Gets Delayed by One Week (04/2021): In a movie that has become far too familiar, the Uncharted movie has been pushed back once again.

Casting Tom Holland as Spider-Man Turned Into a Big Fight Between Sony & the (02/2021): The Russo Brothers and Marvel Studios boss Kevin Feige knew that Tom Holland was the right actor for the job almost immediately.

Tom Holland's New Cherry Poster Gets Quickly Changed After Original Confuses Fan (12/2020): The poster for Tom Holland's upcoming movie with the Russo Brothers was released earlier today and then quickly taken down and replaced.