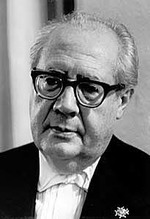 Andrés Segovia Torres, 1st Marquis of Salobreña (21 February 1893 – 2 June 1987) was a virtuoso Spanish classical guitarist from Linares, Spain. Many professional classical guitarists today were students of Segovia, or students of his students. Segovia's contribution to the modern-romantic repertoire not only included commissions but also his own transcriptions of classical or baroque works. He is remembered for his expressive performances: his wide palette of tone, and his distinctive musical personality, phrasing and style. More about Andrés Segovia

The most expensive item with a signature of Andrés Segovia (Andrés Segovia Autographed Photo 1972) was sold on eBay in February 2018 for $500.00 while the cheapest item (SIGNED RECORD SLEEVE,ANDRES SEGOVIA March 15, 1955 in TORONTO Canada) found a new owner for $9.98 in October 2011. The month with the most items sold (2) was February 2019 with an average selling price of $54.89 for an autographed item of Andrés Segovia. Sold items reached their highest average selling price in October 2020 with $325.00 and the month that saw the lowest prices with $9.98 was October 2011. In average, an autographed item from Andrés Segovia is worth $55.00.

Traded items with a signature of Andrés Segovia

Most recently, these items with a signature of Andrés Segovia were sold on eBay - click here for more items.