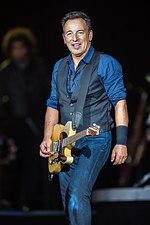 Bruce Frederick Joseph Springsteen (born September 23, 1949) is an American singer, songwriter, and musician. He has released 20 studio albums, many of which feature his backing band the E Street Band. Originally from the Jersey Shore, he is one of the originators of the heartland rock style of music, combining mainstream rock musical style with narrative songs about working class American life. During a career that has spanned six decades, Springsteen has become known for his poetic, socially conscious lyrics and energetic stage performances, sometimes lasting up to four hours in length. He has been nicknamed "the Boss". More about Bruce Springsteen

Current items with a signature of Bruce Springsteen

These are the most current items with a signature of Bruce Springsteen that were listed on eBay and on other online stores - click here for more items.

Traded items with a signature of Bruce Springsteen

Most recently, these items with a signature of Bruce Springsteen were sold on eBay - click here for more items.

It seems Bruce Springsteen's Jeep ad annoyed people on all sides of the aisle (02/10/21): But plenty of Boston.com readers loved it too, according to our poll results.

We want to know: What were your top album and song for 2020? (12/2020): Alicia Keys? Bad Bunny? Bruce Springsteen? Let us know about the new music you had on repeat this year.

Bruce Springsteen rocked out in a benefit show for Boston College financial aid (11/2019): The New Jersey native played a two-hour set to help out students in need at his son's alma mater.

‘Western Stars’ Review: Bruce Springsteen and Broken Cowboys (10/2019): This concert film, directed by the singer and Thom Zimny, puts Bruce in a barn with an orchestra to make some magic.

Due to phenomenal demand, Dublin pub is hosting a second night dedicated to Bruc (01/2019): Bruce Springsteen fans in Ireland are set for one hell of a party because there's a night coming featuring six hours of tracks and burgers

Springsteen on Broadway is Bruce’s Christmas Gift to America (12/2018): The Netflix special is a reminder of our shared ideals and what’s at stake for the future

Bruce Springsteen's legendary 1978 Cleveland gig tops this week's new music (01/2015): The concert calendar is still pretty empty. Luckily, you can tide yourself over with the tidal wave of new live albums. Let’s take a spin through some of the latest and greatest offerings:

Bruce Springsteen Admits He Wrote a Song About a Book Before Reading It (10/2014): Bruce Springsteen recently chatted with The New York Times about his favorite writers and what books he's been reading recently (he's promoting his...

Darlene Love Will Record Songs by Bruce Springsteen, Barry Mann and Cynthia Weil (07/2014): Darlene Love, the Rock and Roll Hall of Fame inductee who has appeared on Broadway in Hairspray, is at work on a new album that will be produced by Steve van Zandt of the E Street Band, according to Showbiz411.com.

Bruce Springsteen to debut short film on website July 9 (06/2014): Poster for "Hunter of Invisible Game" was posted on his website

Bruce Springsteen to receive his own online museum (05/2014): The museum will offer fans the chance to win prizes every six months

Video Post: Bruce Springsteen in Brisbane 2014 (02/2014): The writers of this blog are not music critics, and they don't consider a second (or third, fourth or fifth) mortgage to be a perfectly reasonable course of action to pay for front-row tickets, but despite being a whole lot more middle aged than ...

Millennials hate Bruce Springsteen (08/2013): An entire generation has dismissed The Boss' music as lame "dad rock." Here's why they're all wrong

Bruce Springsteen with sell-out conserts in Norway - again (04/2013): It is said that t here is no place in the world where Bruce Springsteen is as popular as he is in Norway. This week he performed at two sold-out concerts in Oslo.

Bruce Springsteen, Live in Melbourne (03/2013): Seemingly the most notable piece of information gleaned from David Remnick’s celebrated 19,000-word profile of Bruce Springsteen ( We Are Alive, Bruce Springsteen at 62 ) was that the band-leading singer-songwriter has been in psychotherapy for 30 years, in treatment for depression.

Looking back at Bruce Springsteen's three N.J. shows last week (09/2012): Friday and Saturday's shows are already being talked about as two of the best of the Boss' career