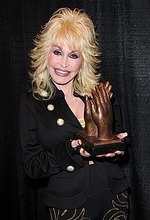 Dolly Rebecca Parton (born January 19, 1946) is an American singer, songwriter, multi-instrumentalist, record producer, actress, author, businesswoman, and humanitarian, known primarily for her work in country music. After achieving success as a songwriter for others, Parton made her album debut in 1967 with Hello, I'm Dolly. With steady success during the remainder of the 1960s (both as a solo artist and with a series of duet albums with Porter Wagoner), her sales and chart peak came during the 1970s and continued into the 1980s. Parton's albums in the 1990s did not sell as well, but she achieved commercial success again in the new millennium and has released albums on various independent labels since 2000, including her own label, Dolly Records. More about Dolly Parton

The most expensive item with a signature of Dolly Parton (GM GRAMMY® Winner Dolly Parton Signed Gibson SJ-200 Acoustic Guitar) was sold on eBay in February 2019 for $3250.00 while the cheapest item (DOLLY PARTON 8 X 10 B&W PHOTO HAND SIGNED BY DOLLY PARTON & RON LEIBMAN) found a new owner for $0.99 in May 2013. The month with the most items sold (104) was December 2019 with an average selling price of $29.99 for an autographed item of Dolly Parton. Sold items reached their highest average selling price in September 2014 with $279.00 and the month that saw the lowest prices with $5.99 was March 2012. In average, an autographed item from Dolly Parton is worth $24.99.

Current items with a signature of Dolly Parton

These are the most current items with a signature of Dolly Parton that were listed on eBay and on other online stores - click here for more items.

Traded items with a signature of Dolly Parton

Most recently, these items with a signature of Dolly Parton were sold on eBay - click here for more items.

Raeanne Rubenstein, Versatile Celebrity Photographer, Dies at 74 (12/05/19): She had a knack for capturing her subjects, whether Andy Warhol in New York or Dolly Parton in Nashville, in ways that caught their essence.

Is There Anything We Can All Agree On? Yes: Dolly Parton (11/21/19): At 73, the enigmatic country star is captivating a whole new generation and riding high as the subject of a podcast and the inspiration behind a Netflix series.

Where to see your favorite local band play as your favorite band this month (10/16/19): Some of Boston’s best bands are dressing up, too — as Dolly Parton and Johnny Cash to Pearl Jam and Oasis.

Dolly Parton Sings Duets With Fan With Down Syndrome Recap (03/2015): Dolly Parton recently made one young boy's dreams come true. Gage Blackwell is an aspiring country singer who has Down syndrome, and during a recent visit with Parton

Dolly Parton Making Moves as Movie Producer (01/2015): Dolly Parton has signed a development deal with NBC, and she’ll apparently be in the producer’s chair for a slate of two-hour TV movies based on her songs, stories and incredible life.

Dolly Parton Theme Park Sued Over Ride Injury (12/2014): A woman's brain injury after a headfirst fall from a ride at Dollywood was caused by a mix of sleet and rain that made the ride "dangerously slick"...

Dolly Parton Talks About Supporting Her Gay Fans (10/2014): The country music legend sits down with Billboard to talk about her career and why she supports her gay followers read more

Will Miley Cyrus join her godmother Dolly Parton on stage at Glastonbury? (06/2014): Wrecking Ball singer could twerk her way across the stage at Britain's biggest music festival tomorrow night

Dolly Parton Doesn't Have Children, and She's Fine With That (05/2014): Why Kids Relate to the Country Star

Dolly Parton didn't sleep with anyone to become a star. (04/2014): The country music legend insisted while she met many men early in her career who encouraged her to sleep her way to the top, she rejected their advances and didn't let them take advantage.

Tour follows Dolly Parton's rise to stardom (03/2014): Tour leader Ruth Miller, of Sevier County, Tenn., stands at the Dolly Parton statue on the lawn of the Sevier County Courthouse in Sevierville. Miller conducts the "Good Golly Miss Dolly" tour that reveals some historical gems about the lives of Dolly Parton and her family members.

Dolly Parton Ditches The Glam At Home: 'I Look Like Hell Like Everybody Else' (10/2013): Dolly Parton is the original queen of country glam, but the legendary singer says she ditches the wigs, eyeliner and lashes when she's at home.

Dolly Parton Addresses Cancer Rumors and Miley Cyrus' Bad Rap (08/2013): Only 'Extra' with an exclusive sit down with Dolly Parton

After Dolly Parton's reported surgery, acid reflux, esophageal cancer link publi (07/2013): The type of esophageal cancer caused by reflux disease has increased by more than 400 percent in the past 20 years in the United States, according to the network

Dolly Parton's business empire built on talent and determination (06/2013): It’s been two years since Brenda McCroskey took a leisurely trip to London, but the CEO of the Sevierville Chamber of Commerce still chuckles in amazement at the familiar face she saw smiling at her as she walked out of the airport.

Music of Dolly Parton comes to Consett (05/2013): A live show featuring the music of country music star Dolly Parton is coming to the Empire Theatre in Consett.

Dolly Parton weighs in on Janelle's American Idol success (03/2013): By now we know that East Tennessee native and American Idol contestant Janelle Arthur is a huge Dolly Parton fan. She played "Little Dolly" at Dollywood as a kid. Now, we're hearing what Dolly thinks about Janelle in an interview with Stoney Sharp.

Women go to work on Dolly Parton’s 9 To 5 (02/2013): Thirty years ago the film 9 To 5, the tale of three office workers who turn the tables on their sexist boss, was a huge hit, capturing the mood of the times. Now its star Dolly Parton has turned it into a musical and proved that not much has changed. SIMON PARKIN reports.

Dolly Parton reveals her unusual teenage beauty secrets including poisonous poke (11/2012): In her new memoir entitled Dream More, the country crooner shared the unusual beauty tricks of her past and one of them is actually a poisonous fruit.

Drinking, Dancing, Dolly Parton: Photos Of The '70s Country Music Scene (08/2012): Believe it or not, this visual catalog of country music culture was shot by a kid from Boston.

Dolly Parton Offers a Look Inside Some of Her Nashville Homes for Dr. Robert F. (07/2012): Dolly Parton invites up to six fans to tour several of her Nashville properties in an unprecedented live auction item, the High Rise HideAway Getaway, for the Dr. Robert F. Thomas Foundation’s annual Evening of Elegance fundraiser on Aug.