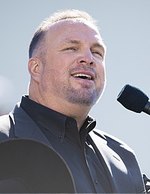 Troyal Garth Brooks (born February 7, 1962) is an American singer and songwriter. His integration of rock and pop elements into the country genre has earned him popularity, particularly in the United States with success on the country single and album charts, multi-platinum recordings and record-breaking live performances, while also crossing over into the mainstream pop arena. More about Garth Brooks

The most expensive item with a signature of Garth Brooks (Garth Brooks Signed Guitar. Lot 89463) was sold on eBay in April 2015 for $2200.00 while the cheapest item (GARTH BROOKS band logo GARTH signature guitar pick -W) found a new owner for $0.97 in April 2020. The month with the most items sold (46) was November 2019 with an average selling price of $24.99 for an autographed item of Garth Brooks. Sold items reached their highest average selling price in October 2015 with $474.50 and the month that saw the lowest prices with $2.00 was November 2010. In average, an autographed item from Garth Brooks is worth $24.95.

Current items with a signature of Garth Brooks

These are the most current items with a signature of Garth Brooks that were listed on eBay and on other online stores - click here for more items.

Traded items with a signature of Garth Brooks

Most recently, these items with a signature of Garth Brooks were sold on eBay - click here for more items.

Garth Brooks Through the Years: From the Class of ‘89 to Selling Out Stadiums [P (02/07/19): See photos of Garth Brooks through the years of his country music career.

Garth Brooks To Perform Special Live CRS Show (02/02/19): Country radio big wigs will get a special show from one of the biggest names in music.

Garth Brooks Tickets: Six Nights in Sacramento (03/2015): Saddle up cowboys and cowgirls! Garth Brooks will be making the first California appearance on his current world tour

Garth Brooks ticket drama to come to Limerick (02/2015): IT was a musical disaster of epic proportions that transfixed a nation and is now set to be made into a stage show.

Lee Brice and Garth Brooks Do Surprise Duet Recap (01/2015): It was a night Lee Brice will never forget. At a recent tour stop in Boston on Saturday (Jan. 26), Garth Brooks brought out a surprise guest for a performance of 'More Than a Memory.'

Garth Brooks Has Top Album for Second Week (11/2014): Make it two for the Man as Garth Brooks’ Man Against Machine spends its second week as Billboard’s No. 1 country album.

Garth Brooks, dad, returns to being Garth Brooks, super-entertainer (09/2014): There were times, Garth Brooks will confess now, when he second-guessed his decision to forsake the life of a country music star to be a stay-at-home dad to his three daughters.

Garth Brooks Reveals Another Tour Date (07/2014): After putting 10 shows in Chicago on sale last week, Garth Brooks announced today that he and his wife Trisha Yearwood will next bring their world tour to Atlanta

More Garth Brooks tickets on sale this Friday (04/2014): If you are still hoping to get your hands on tickets to see country music legend Garth Brooks this summer, set your alarm clocks for Friday morning when more tickets are due to go on sale.

Politicians told “don’t negotiate” on Garth Brooks concerts (03/2014): “The general consensus of both the public and the elected representatives was that Croke Park have been acting in bad faith.”

Garth Brooks Gets a Lecture From Blake Shelton (02/2014): Earlier this month, Blake Shelton tweeted some pretty harsh words to Garth Brooks . Harsh in the sense that he was really the only one brave enough to say what the rest of us have been thinking.

Garth Brooks Explains the Hoodie (12/2013): If you ever wondered how or why a star with endless access to designer clothes and A-game stylists would wear a hoodie at his own concert, this may shed some light on that.

Garth Brooks Calls Wife Trisha Yearwood the 'Real Deal' (11/2013): The country crooner opens up to Ellen DeGeneres about his wife of eight years

Garth Brooks returns to Vegas (09/2013): Just when you thought you’d missed your final opportunity to see Garth Brooks perform in Las Vegas, then missed it again, now comes word that Brooks will be returning for yet another series of shows at the Wynn Las Vegas.

Congrats! Garth Brooks becomes a granddad (07/2013): Country singer Garth Brooks has become a grandfather for the first time, he acknowledged in a statement Friday.August Anna Brooks, 19, gave birth to baby Karalynn and reportedly posted photos of her newborn (in a onesie reading "my mommy doesn't want your advice") on her Facebook page.

Garth Brooks on Getting Out-Sung By George Jones: 'It Was an Honor to Get My Ass (04/2013): George Jones, considered by many to be the greatest country singer of all time, died Friday morning at the age of 81. Longtime fan and friend Garth...

Garth Brooks and George Strait Teaming Up For ACMs (03/2013): The Academy of Country Music already has some amazing performers lined up for the 48th annual ACM Awards on April

Jerrod Niemann Shares Garth Brooks and Blake Shelton Writing Experience (02/2013): Before Jerrod Niemann broke out as a solo artist he was writing for some of the biggest singers in country music

Simon Cowell: ‘The X Factor’s’ Tate Stevens Is The New Garth Brooks (12/2012): Tate is already hard at work on his debut album and according to Simon, the right person won the competition on Dec.

‘X Factor’s Tate Stevens Wants A Duet With Garth Brooks (11/2012): Tate says that he would love to sing with Garth if he makes it to the finale of ‘The X Factor’!