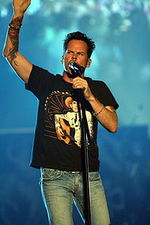 Gary Allan Herzberg (born December 5, 1967) is an American country music artist. Signed to Decca Records in 1996, Allan made his country music debut with the release of his single "Her Man", the lead-off to his gold-certified debut album Used Heart for Sale, which was released in 1996 on Decca. His second album, It Would Be You, followed in 1998. Allan's third album, Smoke Rings in the Dark, was his first one for MCA Nashville (to which he has been signed ever since) and his first platinum album. His next albums, Alright Guy (2001) and See If I Care (2003), both were also certified platinum while Tough All Over (2005) and Greatest Hits (2007) and Living Hard (2007) were all certified gold. His next two albums Get Off on the Pain (2010) and Set You Free (2013) both reached the Top 10 on the U.S. Billboard Top Country Albums charts, at numbers 2 and 1 respectively. More about Gary Allan

The most expensive item with a signature of Gary Allan (GARY ALLAN Signed New Telecaster Guitar Watching Airplanes Tough Little Boys GAI) was sold on eBay in April 2019 for $339.00 while the cheapest item (GARY ALLAN AUTOGRAPHED SIGNED CD SEE IF I CARE COA W/MATCHING HOLOGRAM) found a new owner for $0.99 in September 2013. The month with the most items sold (4) was April 2019 with an average selling price of $8.47 for an autographed item of Gary Allan. Sold items reached their highest average selling price in September 2019 with $299.99 and the month that saw the lowest prices with $2.25 was September 2013. In average, an autographed item from Gary Allan is worth $14.99.

Current items with a signature of Gary Allan

These are the most current items with a signature of Gary Allan that were listed on eBay and on other online stores - click here for more items.

Traded items with a signature of Gary Allan

Most recently, these items with a signature of Gary Allan were sold on eBay - click here for more items.