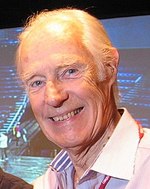 Sir George Henry Martin, CBE (3 January 1926 – 8 March 2016) was an English record producer, arranger, composer, conductor, audio engineer, and musician. He was referred to as the "Fifth Beatle" in reference to his extensive involvement on each of the Beatles' original albums. Paul McCartney said upon Martin's death, "If anyone earned the title of the fifth Beatle, it was George". More about George Martin

The most expensive item with a signature of George Martin (RARE Beatles Collectible - Limited Edition Book Signed By Sir George Martin) was sold on eBay in January 2018 for $399.00 while the cheapest item (GEORGE MARTIN 83 TOPPS Signed Card GIANTS OREGON) found a new owner for $0.75 in May 2008. The month with the most items sold (8) was September 2013 with an average selling price of $19.99 for an autographed item of George Martin. Sold items reached their highest average selling price in July 2019 with $255.00 and the month that saw the lowest prices with $2.04 was June 2014. In average, an autographed item from George Martin is worth $35.00.

Current items with a signature of George Martin

These are the most current items with a signature of George Martin that were listed on eBay and on other online stores - click here for more items.

Traded items with a signature of George Martin

Most recently, these items with a signature of George Martin were sold on eBay - click here for more items.

Robinson+Cole Honors George Martin with Giving Cup Award for His Work to Help 9/ (12/14/14): Former New York Giants star defensive end spoke about his book Just Around the Bend - My Journey for 9/11 at awards reception (PRWeb December 15, 2014) Read the full story at http://www.prweb.com/releases/Robinson-and-Cole/Honors-George-Martin/prweb12393127.htm

My Hometown: Former Giant George Martin on his adopted home in Ringwood (11/02/14): The Ringwood resident may be a transplant, but he loves the state like a native. He loves the humidity in the summer. He loves the changing vistas that he and his wife, Dianne, often photograph. But the landscape isn't the only thing that rooted the family to New Jersey.

George Martin Ways In on Roger Goodell and the State of the NFL (09/2014): Former New York Giants defensive end, and former NFL Alumni President George Martin joined the Scott Garceau Show with Jeremy Conn to discuss whats been going on in the NFL in particular the Ray Rice scandal

Jack Vance Dies: Game Of Thrones Writer George Martin Leads Tributes To Sci-Fi G (05/2013): Tributes from the great and good of the science fiction writing world have been pouring in the light of the death of Jack Vance, best known for his...

Howard Stern turns his fire on Beatles’ mentor George Martin (10/2012): Today's 50th anniversary of the release of Love Me Do, the Beatles’ first single, has been soured after an extraordinary attack on Sir George Martin, the celebrated producer, by the controversial American broadcaster Howard Stern.

Retired Giant George Martin leads way in 4th annual walk honoring 9/11 first res (09/2012): About 450 people came out on a brisk fall day for this year’s Giant Steps for 9/11 walk, which awareness — and money — for the treatment of 9/11 rescue and recovery workers.

The Day George Martin Became A Knight (06/2012): On this day in 1996, Record producer George Martin received a Knighthood. Plus, music promoter Harvey Goldsmith became an MBE and Van Morrison an OBE.