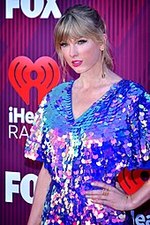 Taylor Alison Swift (born December 13, 1989) is an American singer-songwriter. Her discography spans multiple genres, and her narrative songwriting—often inspired by her personal life—has received critical praise and widespread media coverage. Born in West Reading, Pennsylvania, Swift moved to Nashville, Tennessee, at the age of 14 to pursue a career in country music. She signed a songwriting contract with Sony/ATV Music Publishing in 2004 and a recording deal with Big Machine Records in 2005, and released her eponymous debut studio album in 2006. More about Taylor Swift

Current items with a signature of Taylor Swift

These are the most current items with a signature of Taylor Swift that were listed on eBay and on other online stores - click here for more items.

Traded items with a signature of Taylor Swift

The most expensive item with a signature of Taylor Swift (TAYLOR SWIFT SIGNED AUTOGRAPH GIBSON EPIPHONE ACOUSTIC GUITAR w/ INSCRIPTION JSA) was sold in January 2022 for $14999.50 while the cheapest item (SWIFT - TAYLOR SWIFT band signature logo guitar pick -(w1)) found a new owner for $0.01 in August 2020. The month with the most items sold (748) was September 2020 with an average selling price of $71.00 for an autographed item of Taylor Swift. Sold items reached their highest average selling price in December 2016 with $389.75 and the month that saw the lowest prices with $5.99 was June 2013. In average, an autographed item from Taylor Swift is worth $59.99.

Most recently, these items with a signature of Taylor Swift were sold on eBay - click here for more items.

Ticketmaster Cast as a Powerful ‘Monopoly’ at Senate Hearing (01/24/23): The Judiciary Committee, responding to the bungled sale of Taylor Swift concert tickets, heard the company apologize and its critics trace the problem to the industry’s lack of competition.

Live Nation President Says Bot Attack Led to Taylor Swift Fiasco (01/24/23): The president and chief financial officer of Live Nation testified that the biggest problem it faced with the Taylor Swift tour was an onslaught of bots that crowded out fans and attacked Ticketmaster’s servers.

Ticketmaster Under the Magnifying Glass (01/19/23): The concert giant has long been the target of consumer complaints and artists’ ire. Recent incidents involving Taylor Swift and Bad Bunny have renewed focus on problems in the live marketplace.

SZA’s ‘SOS’ Holds Off Taylor Swift for a Fourth Week at No. 1 (01/09/23): Both artists introduced new digital versions of their albums, bringing a tight race to a typically sleepy week on the Billboard charts.

Year-End Listener Mailbag: Your 2022 Questions, Part 1 (12/2022): You asked, we answered your queries about Taylor Swift, Olivia Rodrigo, the state of indie rock and more.

With No Major Releases to Challenge Her, Taylor Swift Sticks at No. 1 (11/2022): “Midnights” logs a fourth week leading the Billboard 200, while Drake and 21 Savage, Bad Bunny and Lil Baby also hold their spots in the Top 5.

Taylor Swift’s Smash ‘Midnights’ Sells More Than 1 Million in a Week (10/2022): The singer-songwriter’s latest album is a blockbuster, debuting with the biggest weekly total for any LP since Adele’s “25” in 2015.

Taylor Swift Announces a New Album, ‘Midnights’ (08/2022): The LP, described by Swift as “the story of 13 sleepless nights,” is due Oct. 21. It will be her 10th studio album, and her fifth release in just over two years.

Taylor Swift and Ed Sheeran Up the Ante, and 13 More New Songs (02/2022): Hear tracks by Jazmine Sullivan, Brandee Younger, Caroline Polachek and others.

Adele Is No. 1 With a Huge Week, but Without a Million in Sales (11/2021): “30” tops the Billboard album chart with the equivalent of 839,000 sales in the United States, leaving Taylor Swift’s “Reputation” as the last LP to cross the million mark.

Taylor Swift’s ‘Folklore’: Let’s Discuss (07/2020): On an album made entirely in quarantine, the singer and songwriter embarks in a fresh direction.

Taylor Swift Signs Songwriting Deal With Universal (02/2020): The star singer-songwriter is leaving Sony/ATV, the home of her music publishing rights since age 14, for a new agreement with Universal.

See How 7 Grammy Artists Made Their Hits (01/2020): Taylor Swift, Billie Eilish, Lil Nas X, Lizzo and more reveal their creative processes in our Diary of a Song series.

How Taylor Swift Writes a Love Song (12/2019): Using exclusive voice memos, video and interviews, see how a late-night idea turned into “Lover,” her fourth song of the year nominee at the Grammys, and her first without a co-writer.

How Taylor Swift Dragged Private Equity Into Her Fight Over Music Rights (11/2019): The Carlyle Group, an investor in her catalog, has stepped in to encourage talks between Ms. Swift and Scooter Braun, who now controls her old label.

Doyle calls out “scumbags” who steal music, respects Taylor Swift, Post Malone (02/2019): Misfits guitarist Doyle Wolfgang von Frankenstein has recently denounced meet and greets, as well as the reason he feels he has to do them.

Did Kylie Jenner Reference Taylor Swift With New Valentine's Day Collection? (01/2019): Now the names of the lip products could easily be a coincidence, but we still wonder if Kylie Jenner was indeed making a reference to Taylor Swift.

Taylor Swift And Calvin Harris Have Just Had a Sleepover! (04/2015): Stars appear to confirm romance rumours after date night...

Taylor Swift is obsessed with Beyoncé (02/2015): Taylor Swift admits it's 'arguable' whether her Beyoncé adoration is unhealthy.

Taylor Swift Set To Receive Top AMA Award (11/2014): The singer will be the first to receive a new award for excellence at this weekend’s ceremony…

Taylor Swift 'Shake it Off' director rebuts racism charges (08/2014): Mark Romanek, who directed Taylor Swift's new "Shake It Off" video, is defending his work against claims it's racist. "We simply choose styles of dance that we thought would be popular and amusing," Romanek told Vulture.

Taylor Swift on New Album: 'It's Already My Favorite Thing' (05/2014): The pop/country superstar, who's currently in Asia for the last leg of her massive 'Red' tour, says that she won't extend the tour so she can focus on her new project.

Taylor Swift Isn't Country (04/2014): Sometimes everybody wins when massive 'brands' play both sides of the fence. Click to view a price quote on AAPL . Click to research the Consumer Durables industry.

Are Your Wallets Ready For Taylor Swift's Concert Tickets? (02/2014): Wait, what? The tickets are finally available? And they're how much? Time to figure out how we're scoring those tickets by Friday! Which ones are you and your besties going to buy?

Taylor Swift, Selena Gomez & More: 10 Best Dressed Of The Week (01/2014): From glam gowns to sexy jumpsuits, see all the incredible looks and VOTE for which one you loved.

Taylor Swift Vector Arena review (11/2013): As a huge fan of Taylor Swift, I had high expectations for her RED Tour – and the 23-year-old star didn't disappoint.

Taylor Swift might be in 'The Giver' (09/2013): Los Angeles, Sep 28 (IANS) Singer Taylor Swift has reportedly joined the cast of the movie adaptation of the novel "The Giver".

Taylor Swift in Portland: First impressions, favorite songs, and the set-list (08/2013): The pop star's sold-out Moda Center show had plenty of bright, colorful moments. From the red dresses to the confetti cannons, here are a handful of songs and impressions that stood out.

No Taylor Swift in the 1D movie (07/2013): Taylor Swift will not be making an appearance in the One Direction movie, as filming started after she split form Harry Styles.

Taylor Swift delights Indy fans (04/2013): It was a sea of red and screaming girls downtown Friday night as Taylor Swift wowed her Hoosier fans in concert.

Taylor Swift and Ed Sheeran reportedly rekindle romance (02/2013): Taylor Swift is known for her high-profile relationships, while very little is known about...

Taylor Swift doesn't have a type (01/2013): Taylor Swift says she isn't attracted to any specific type of guy but enjoys 'hanging out' with new people.

Taylor Swift: The REAL Reason She Bought House Near Conor Kennedy (12/2012): When Taylor was still dating Conor, she began the process of purchasing a house near his family’s compound.

Taylor Swift Ignores Constant Gossip: 'Happiness Doesn't Include Googling Myself (10/2012): The Singer Talked Inspiration, Rumours And Touring On A US Talkshow Last Night...

Taylor Swift and Joe Jonas reunite affectionately (09/2012): Taylor Swift made sure to tell the world when ex-boyfriend Joe Jonas dumped her in 2008 over a 27-second phone call. But the country cutie has clearly moved on. read more

WATCH: Taylor Swift Debuts 'We Are Never Ever Getting Back Together' Music Video (08/2012): Star Runs Wild In New Clip

Hayden Panettiere: I'm Not Playing Taylor Swift In New Drama Nashville (07/2012): Hayden Panettiere is set to play a fresh-faced country superstar on the rise in the fall-due drama, "Nashville," but she batted away rumors her character is a take-off on Taylor Swift.

Taylor Swift Unveils New Fragrance (06/2012): Taylor Swift has taught a generation of kids to appreciate country music over the last five years. Now, she's donating $4 million to the Country Music Hall of Fame and Museum to make sure that education continues.

Taylor Swift gets Country Music Hall of Fame exhibit (05/2012): The singer's record-breaking 'Speak Now Tour' is being saluted by the hall.

Why Taylor Swift's Next Album Is Going To Be Unbelievably Good (03/2012): We CANNOT wait for new Taylor Swift tunes. And we KNOW it's gonna be good.

Taylor Swift Brings Out Nicki Minaj for 'Super Bass' Duet: Video (08/2011): Nicki Minaj crashed Taylor Swift's concert at the Staples Center to perform the song that won her the award, "Super Bass," alongside the country star.

2011 Teen Choice Awards: Taylor Swift, Lady GaGa Vie for Music Female Artist Tit (06/2011): As the first wave of nominations is announced, it is unraveled that country music beauty Swift wins over dance queen GaGa in terms of number with five nods in the music categories.