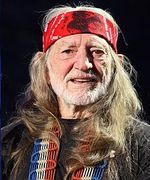 Willie Hugh Nelson (born April 29, 1933) is an American musician, actor, and activist. The critical success of the album Shotgun Willie (1973), combined with the critical and commercial success of Red Headed Stranger (1975) and Stardust (1978), made Nelson one of the most recognized artists in country music. He was one of the main figures of outlaw country, a subgenre of country music that developed in the late 1960s as a reaction to the conservative restrictions of the Nashville sound. Nelson has acted in over 30 films, co-authored several books, and has been involved in activism for the use of biofuels and the legalization of marijuana. More about Willie Nelson

Current items with a signature of Willie Nelson

These are the most current items with a signature of Willie Nelson that were listed on eBay and on other online stores - click here for more items.

Traded items with a signature of Willie Nelson

The most expensive item with a signature of Willie Nelson (Fender Guitar Signed by Madonna, Willie Nelson, David Bowie & Paul Simon) was sold in April 2021 for $5000.00 while the cheapest item (WILLIE NELSON & FAMILY band Signature Logo guitar pick -(W3)) found a new owner for $0.01 in October 2020. The month with the most items sold (110) was November 2019 with an average selling price of $27.00 for an autographed item of Willie Nelson. Sold items reached their highest average selling price in June 2016 with $149.99 and the month that saw the lowest prices with $1.88 was March 2009. In average, an autographed item from Willie Nelson is worth $34.99.

Most recently, these items with a signature of Willie Nelson were sold on eBay - click here for more items.

Willie Nelson’s Long Encore (08/17/22): As he approaches 90, even brushes with death can’t keep him off the road — or dim a late-life creative burst.

Willie Nelson returns to the house he built in ACL Season 44 on Austin City Limi (01/25/19): Austin City Limits proudly welcomes back a longtime friend, American music icon Willie Nelson, in a career-spanning hour as he performs a mix of his universally-known hits and new classics from his timeless catalog. There’s a …

Denzel Curry Says He's Dropping A Dubstep Album & A Collab With Willie Nelson (12/2018): Who's here for a Zeltron dubstep album? One of the artists we're most looking forward to hearing from in 2019 is Denzel Curry. He came through with a solid effort in TA13OO and has been teasing some new music on his social platforms. Denzel is one of the most talented and creative individuals to hav

Willie Nelson's 'Red Headed Stranger' at 40: Portland songwriters on his outlaw (01/2015): Richmond Fontaine's Willy Vlautin and more weigh in on the country legend's 1975 "labor of love."

Willie Nelson: 10 Prime Hits (10/2014): The first band Willie Nelson joined played polka. He was only 10, but he brought several years of experience to the group. His grandparents bought him a guitar from Sears when he was 6, and he started writing his own songs the year after that. He hasn't stopped since.

Willie Nelson's braids on auction block (08/2014): If you have several thousand dollars to burn, you could become the new owner of some of the most famous braids in the music business.

Lens Blog: On the High Road Again, With Willie Nelson (05/2014): An exhibit of country music stars explores how photography helped shape the music’s public image. It also sparked memories of a favorite assignment.

Willie Nelson Celebrates His 81st Birthday by Earning a 5th-Degree Black Belt (04/2014): You may know him as a country music star but you may not know he's been practicing Korean martial arts for 20 years.

Willie Nelson Records Video For Environmental Initiative (03/2014): Singer Willie Nelson has thrown his support behind an initiative to fight a coal mining practice, which involves blowing up mountaintops, by...

To all Willie Nelson's fans (12/2013): From left, Jackie Autry, Willie Nelson,and Harold Matzner, chairman of the McCallum Theatre, backstage at the theater.

See what it's like to box Cleveland's Willie Nelson as he prepares for Saturday' (06/2013): Nelson facing the biggest bout of his career Saturday as he competes in an HBO-televised bout at 9:45 p.m. against Argentina's Luciano Leonel Cuello (32-2, 16 KOs) at Foxwoods Casino in Connecticut.

Melbourne Willie Nelson concert still on for Friday (01/2013): Singer Willie Nelson postponed a concert scheduled for Thursday night at Germain Arena in Fort Myers because of the flu, according to the Fort Myers News-Press.

Weekend calendar: Willie Nelson performs tonight in Alexandria (11/2012): Finally we get to settle into warm nights and hot fires and the smell of hot chocolate in the air. It's the time of year when our calendars are booked with holiday parties, and old friends are back in town to visit.

Willie Nelson On Piano Jazz (10/2012): Country music legend Willie Nelson and jazz guitarist Jackie King join host Marian McPartland for this session from 2002. The "Red-Headed Stranger" brings his country, blues and gospel influences to bear on standards like "The Nearness of You" and Nelson's 1961 hit for Patsy Cline, "Crazy."

Willie Nelson memoir coming (09/2012): As MSN Music reported exclusively in May , Willie Nelson has written a new memoir titled “Roll Me Up And Smoke Me When I Die.” Now, the book has been scheduled for a Nov. 13 release date, and new details have been revealed.

Willie Nelson gets back on the road for “Lawless” premiere (08/2012): Cannabis-loving country star Willie Nelson was on the road again after canceling a concert last week due to “altitude sickness.” The icon was seen Saturday...