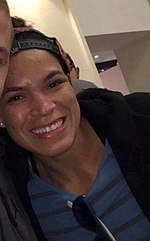 Amanda Lourenço Nunes (born May 30, 1988) is a Brazilian professional mixed martial artist. She currently competes in the Ultimate Fighting Championship (UFC), in which she is the reigning champion of the women’s bantamweight and featherweight divisions. She is the first woman to become a two-division UFC champion, and the third fighter in the UFC history to hold titles in two weight classes simultaneously, after Conor McGregor and Daniel Cormier. She is also the first and only fighter in UFC history to defend two titles while actively holding them. Nunes is widely considered to be the greatest women's MMA fighter of all time. As of June 2, 2020, she is #1 in the UFC women's pound-for-pound rankings. More about Amanda Nunes

Current items with a signature of Amanda Nunes

These are the most current items with a signature of Amanda Nunes that were listed on eBay and on other online stores - click here for more items.

Traded items with a signature of Amanda Nunes

The most expensive item with a signature of Amanda Nunes (Amanda Nunes autographed UFC 207 fight ticket inscription champ proof picture) was sold in December 2016 for $499.00 while the cheapest item (AMANDA NUNES AUTOGRAPHED CARD) found a new owner for $1.99 in June 2019. The month with the most items sold (12) was September 2017 with an average selling price of $17.24 for an autographed item of Amanda Nunes. Sold items reached their highest average selling price in December 2016 with $299.49 and the month that saw the lowest prices with $3.75 was March 2016. In average, an autographed item from Amanda Nunes is worth $25.49.

Most recently, these items with a signature of Amanda Nunes were sold on eBay - click here for more items.

Sources: Nunes withdraws from UFC 256 bout (11/09/20): Two-weight UFC champion Amanda Nunes has withdrawn from her featherweight title defense against Megan Anderson next month for undisclosed reasons, according to multiple sources.

Real or not: Will Nunes close out the 145-pound division? Will Jones thrive at h (08/24/20): Amanda Nunes doesn't seem to have any challengers left at 145 after Megan Anderson; what will the UFC do with the division from here?

UFC 250 results -- Amanda Nunes vs. Felicia Spencer: Fight card, highlights, com (06/07/20): A look at everything that went down this week as the UFC 250 fight card took center stage in Las Vegas

UFC 250: Live results and analysis (06/2020): Follow every fight throughout the night leading up to Amanda Nunes defending her featherweight title.

Nunes-Spencer highlights full UFC 250 card (05/2020): The main event of UFC 250 on June 6 will feature two-weight female champion Amanda Nunes, who will look to defend her 145-pound featherweight title against Felicia Spencer. UFC 250 will take place in Las Vegas, without fans in attendance.

UFC two-division champion Amanda Nunes open to future WWE run: 'I could try some (04/2020): The UFC bantamweight and featherweight queen is the latest MMA star to suggest a willingness to explore pro wrestling