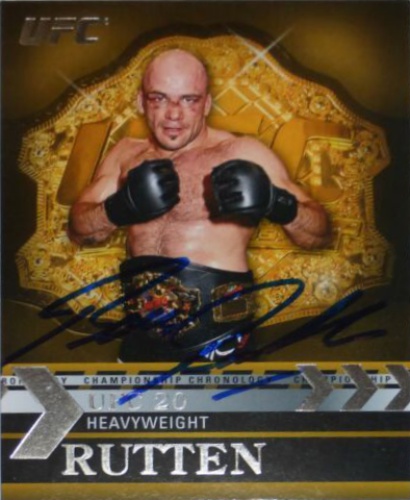 Sebastian "Bas" Rutten (born 24 February 1965) is a Dutch-American actor, former mixed martial artist, kickboxer and professional wrestler. He was a UFC Heavyweight Champion, a three-time King of Pancrase world champion, and finished his career on a 22 fight unbeaten streak (21 wins, 1 draw). FightMetric wrote this when Rutten got inducted into the UFC Hall of Fame: " ran the numbers on Rutten's career. They back up the Dutchman's inclusion into the UFC Hall of Fame and then some. In the 4-hours, 27-minutes and 8-seconds he spent as a pro fighter, Rutten scored 13 knockdowns without getting dropped himself, his significant strike accuracy was 70.6%, the highest FightMetric has ever recorded, attempted a record 53 submissions and successfully swept his opponents a record 46 times." From 2007 to 2016, Rutten was the co-host of Inside MMA on AXS TV. Rutten became a naturalized American citizen receiving citizenship in the late 1990s. More about Bas Rutten

Current items with a signature of Bas Rutten

These are the most current items with a signature of Bas Rutten that were listed on eBay and on other online stores - click here for more items.

Traded items with a signature of Bas Rutten

Most recently, these items with a signature of Bas Rutten were sold on eBay - click here for more items.

Video: Bas Rutten says UFC champ Jon Jones beatable, just like everyone else (06/05/14): Bas Rutten admires the way Jon Jones is a student of the game. But in spite of that, he thinks the current light heavyweight kingpin will one day get caught – because everyone else does.Filed under: Featured, Featured Videos, News, UFC, Videos