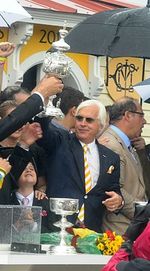 Current items with a signature of Bob Baffert

These are the most current items with a signature of Bob Baffert that were listed on eBay and on other online stores - click here for more items.

Traded items with a signature of Bob Baffert

The most expensive item with a signature of Bob Baffert (2007 Topps Allen and Ginter Bob Baffert Autograph BAS Authentic - Kentucky Derby) was sold in May 2021 for $250.00 while the cheapest item (Bob Baffert Autographed Index Card) found a new owner for $0.01 in August 2016. The month with the most items sold (3) was September 2022 with an average selling price of $3.25 for an autographed item of Bob Baffert. Sold items reached their highest average selling price in June 2021 with $165.00 and the month that saw the lowest prices with $0.99 was December 2009. In average, an autographed item from Bob Baffert is worth $20.00.

Most recently, these items with a signature of Bob Baffert were sold on eBay - click here for more items.

Baffert can saddle up after 1-year N.Y. racing ban (01/26/23): Trainer Bob Baffert's one-year ban in New York has ended, allowing him to again enter his horses into races. He still is banned by Churchill Downs Inc.

Baffert denies cheating, fights for Medina Spirit (05/06/22): Hall of Fame trainer Bob Baffert, who has been banned from horse racing for 90 days and the Kentucky Derby through 2023, denies cheating after Medina Spirit was stripped of last year's win following a positive test for a banned substance.

Corniche wins BC Juvenile for embattled Baffert (11/06/21): Corniche scored a 1 3/4-length win in the Breeders' Cup Juvenile and will be an early favorite for next year's Kentucky Derby at Churchill Downs, where his trainer, Bob Baffert, has been banned.

Breeders' Cup: Baffert horses OK with conditions (10/2021): The Breeders' Cup has cleared Bob Baffert to enter horses next month at Del Mar, but he has to meet certain conditions, including stricter out-of-competition testing of his horses and greater security at his barn.

Reports: 2 horses trained by Baffert fail drug tests (05/2020): Two horses from the barn of trainer Bob Baffert, including a top contender for the Belmont Stakes, have tested positive for the banned substance lidocaine, according to multiple reports.

Maximum Security owner fires indicted trainer (03/2020): Gary West, the owner of Maximum Security, is sending the horse to Bob Baffert after trainer Jason Servis was charged by federal authorities with administering performance-enhancing drugs to the horse.