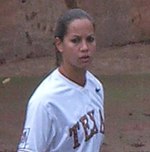 Catherine Leigh Osterman (born April 16, 1983) is a retired American softball pitcher originally from Houston, Texas. Osterman pitched on the USA Women's Softball Team which won the gold medal at the 2004 Summer Olympics and the silver medals in the 2008 and 2020 Summer Olympics. She was a collegiate four-time All-American and six-time professional All-Star, left-handed softball pitcher and former softball assistant coach. She completed her college eligibility in 2006 at the University of Texas at Austin, where she was a starting pitcher for the Longhorns since 2002. Osterman holds the Big 12 Conference pitching Triple Crown for her career wins, ERA, strikeouts, as well as shutouts, no-hitters, WHIP and perfect games, additionally claiming the NCAA Division I record for strikeout ratio (14.34). In the National Pro Fastpitch, Osterman was drafted #1 and is the career leader in strikeout ratio (10.90) and no-hitters (6). She is also one of NCAA's five pitchers to strikeout 1,000 batters with 100 wins, an ERA of under 1.00, and averaging double digit strikeouts. She was a member of the independent "This is Us" team. In May of 2020, she joined and eventually won the inaugural championship in the Athletes Unlimited Softball league as the top individual points leader. Osterman was also named #3 Greatest College Softball Player and the No. 1 pitcher in NCAA history. More about Cat Osterman

Current items with a signature of Cat Osterman

These are the most current items with a signature of Cat Osterman that were listed on eBay and on other online stores - click here for more items.

Traded items with a signature of Cat Osterman

Most recently, these items with a signature of Cat Osterman were sold on eBay - click here for more items.

U.S. softball beats Italy as play begins in Tokyo (07/21/21): Cat Osterman dominated for the United States as it began its quest to regain the Olympic softball gold medal, pitching one-hit ball over six innings and striking out nine to beat Italy 2-0 on Wednesday.

Cat Osterman and Andrea Duran Thriving After 30 (07/29/14): Kissimmee, FL-At what age does a female athlete reach her prime? It may depend on the sport and it probably depends on the work the athlete puts into her athletic success.

Harry Potter Created a Lasting Bond between Cat Osterman and Cassie Tysarczyk (06/2014): Kissimmee, FL - A pitcher teaching hitting camp, A Texas Longhorn taking special interest in a future Texas A&M Aggie, and a debate about reading Harry Potter. What do these three things have in common?

Cat Osterman Throws Her 2nd No-Hitter, Pride Wins 8 - 0 (07/2013): Little Falls, NJ - July 20, 2013 - The USSSA Pride and the NY/NJ Comets kicked off a much anticipated 4 game series last night in Little Falls, NJ on the campus of Montclair State University. It was the return of professional fastpitch softball to the northeast for the first time in five years.

Pride Pitcher Cat Osterman Throws No-Hitter (06/2013): Kissimmee, FL - The final game of the four-game opening series against the NY/NJ Comets Tuesday night was a walk in the park for the USSSA Pride (3-1).

Mike Barnes talks with Cat Osterman about RBI Softball Program (01/2013): Longhorn legend Cat Osterman has teamed up with Matt Price and the group at RBI Baseball in Austin to start an RBI Softball program. The program is designed to help inner city youth and Cat Osterman made the announcement at the program's benefit ban