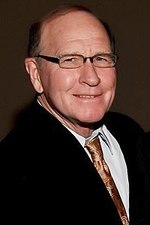 Danny Mack Gable (born October 25, 1948) is an American former folkstyle and freestyle wrestler and coach. Considered to be one of the greatest wrestlers of all time, Gable is a two-time NCAA Division I national champion, a world gold medalist, and an Olympic gold medalist. Gable was only the third wrestler to have ever been inducted into the United World Wrestling's Hall of Fame in the Legend category. On December 8, 2020, U.S. President Donald Trump awarded Gable with the Presidential Medal of Freedom. More about Dan Gable

Current items with a signature of Dan Gable

These are the most current items with a signature of Dan Gable that were listed on eBay and on other online stores - click here for more items.

Traded items with a signature of Dan Gable

The most expensive item with a signature of Dan Gable (Dan Gable Panini Olympic Games München 1972 RC Rookie PSA DNA Signed Auto GOAT) was sold in January 2021 for $1500.00 while the cheapest item (DAN GABLE NCAA WRESTLING HAND SIGNED 3X5 INDEX CARD) found a new owner for $0.98 in October 2012. The month with the most items sold (16) was December 2013 with an average selling price of $15.47 for an autographed item of Dan Gable. Sold items reached their highest average selling price in February 2008 with $112.25 and the month that saw the lowest prices with $1.73 was October 2008. In average, an autographed item from Dan Gable is worth $11.50.

Most recently, these items with a signature of Dan Gable were sold on eBay - click here for more items.

Dan Gable opens up about life on, off mat in new book (02/18/15): Gable’s new book, “A Wrestling Life: The Inspiring Stories of Dan Gable,” went on sale this week.

Dan Gable to speak before 'Foxcatcher' screening (02/09/15): Gable will join the final screening of "Foxcatcher" at 3 p.m. Saturday at FilmScene

Dan Gable museum reflects on flooding one year ago (01/07/15): On January 7, 2014, the Dan Gable Museum in downtown Waterloo saw extensive flooding due to a pipe bursting.

Vikings hear message from Dan Gable about learning from loss (11/02/14): Mike Zimmer had his idol address his team Saturday night.

The day Dan Gable came to town (12/2013): For former Hawkeye wrestling coach and gold-medal Olympian Dan Gable, everything in his life comes down to one thing — family.

On the Mat with Dan Gable (08/2013): This photo gallery shows how the Iowa legend has dedicated his life to wrestling.

Iowa Icons: Dan Gable (06/2013): Over the years, Dan Gable has been the subject of seemingly countless articles, books and documentaries ... to the point where fans may think they know all there is to know about the iconic wrestler, coach and international ambassador for the sport.

Video: Dan Gable talks about wrestling fight on Fox and Friends' (02/2013): Enter your email and we will send you a link to reset your password. We hope you have enjoyed your complimentary access. You now have full access. Thank you for subscribing.

Dan Gable brings tough-guy image to North Mankato (11/2012): For those unfamiliar with the wrestling prowess of Dan Gable, this perspective might help: In his native state Iowans had a saying: "Michael Jordan is the Dan Gable of basketball."

Iowa Scene: Iowa Energy, Dan Gable (10/2012): BASKETBALL: NBA veteran and fan favorite Othyus Jeffers will return to play for the Iowa Energy of the NBA Development League at the outset of the 2012-13 season, the team announced Wednesday.

Laps Around London: Gabby Douglas, Liang Chow, Dan Gable, Lolo Jones (08/2012): Liang Chow can sleep more easily now that his gymnastics star, Gabby Douglas, has captured gold medals in the team and individual all-around competitions at the London Olympics. And it appeared that he could use a little rest on Friday morning.