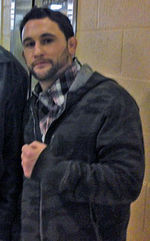 Frank James Edgar (born October 16, 1981) is an American professional mixed martial artist who competes in the bantamweight division of the Ultimate Fighting Championship (UFC), where he is the former UFC lightweight champion. After capturing and defending his lightweight title multiple times, Edgar competed at featherweight, challenging for the UFC Featherweight Championship on three occasions. He also competed in collegiate wrestling out of the Clarion University of Pennsylvania, where he was a four-time NCAA Division I National qualifier. As of December 13, 2021, he is ranked #11 in the UFC bantamweight rankings. More about Frankie Edgar

Current items with a signature of Frankie Edgar

These are the most current items with a signature of Frankie Edgar that were listed on eBay and on other online stores - click here for more items.

Traded items with a signature of Frankie Edgar

The most expensive item with a signature of Frankie Edgar (UFC 144 event signed poster Ben Henderson Frankie Edgar 24 autographs UFC COA) was sold in March 2012 for $450.00 while the cheapest item (FRANKIE EDGAR THE ANSWER UFC MMA SIGNED 11X14 PHOTO) found a new owner for $0.99 in September 2017. The month with the most items sold (20) was April 2012 with an average selling price of $13.75 for an autographed item of Frankie Edgar. Sold items reached their highest average selling price in December 2011 with $130.00 and the month that saw the lowest prices with $0.99 was July 2016. In average, an autographed item from Frankie Edgar is worth $15.50.

Most recently, these items with a signature of Frankie Edgar were sold on eBay - click here for more items.

Stealing the spotlight, beating the odds: Inside Frankie Edgar's improbable run (02/03/21): Edgar will again be the underdog vs. Cory Sandhagen in a key bantamweight bout, but history suggests Edgar should not be overlooked.

UFC divisional rankings: Frankie Edgar enters at 135 pounds after win in bantamw (08/25/20): Edgar edged Pedro Munhoz by split decision in his bantamweight debut this past weekend

Edgar defies critics, edges Munhoz by decision (08/23/20): At 38, Frankie Edgar proved he has "still got some fight in this tank," edging out Pedro Munhoz by split decision to win his bantamweight debut Saturday night.

UFC Fight Night viewers guide: Will smaller be better for Frankie Edgar? (08/2020): Frankie Edgar, a former lightweight champion who made three title challenges at featherweight, makes his debut at bantamweight on Saturday.

Pedro Munhoz out of UFC Fight Night matchup vs. Frankie Edgar after testing posi (07/2020): Munhoz was set to be Edgar's first opponent in the bantamweight division

Khabib Nurmagomedov, Frankie Edgar top our list of the 10 greatest lightweight f (03/2020): Nurmagomedov may miss out on a planned bout with Tony Ferguson yet again, but he's still the best in history

MMA news, rumors: Bellator vs. RIZIN matchups coming together for December, Fran (11/2019): The Dec. 29 and 31 cards suffered a big blow, but have some intriguing matchups newly scheduled.

UFC news, rumors: Conor McGregor and Frankie Edgar take to Twitter in pursuit of (10/2019): According to the fighters, the ball is in the court of UFC president Dana White

Top Contenders Frankie Edgar and Urija Faber Headline Historic Debut UFC Event i (03/2015): The UFC® announced that its upcoming live event debut in Manila on Saturday, May 16 at the Mall of Asia Arena will be headlined by two former champions, as the featherweight division’s No. 1 contender Frankie Edgar comes head to head with Urijah Faber

Frankie Edgar, Urijah Faber to headline UFC Fight Night in Manila (02/2015): A five-round featherweight battle between Frankie “The Answer” Edgar and Urijah “The California Kid” Faber will be the main event of the much-anticipated arrival of the Ultimate Fighting Championship (UFC) in the Philippines.

Frankie Edgar: Cub Swanson is going to have to fight me sooner or later, so why (07/2014): Former UFC lightweight champion Frankie Edgar knows fellow featherweight contender Cub Swanson will be on the other side of the cage one of these days. So as far as “The Answer” sees it, why not just do it now?Filed under: Featured, News, UFC

White: B.J. Penn wanted Henderson as stepping stone to Frankie Edgar trilogy (09/2013): RIO DE JANEIRO – B.J. Penn has his trilogy fight set up with Frankie Edgar, and he didn't have to take any extra steps to get there after originally thinking maybe he'd have to fight Benson Henderson to get a shot at Edgar.

Video: Watch UFC 164's Benson Henderson win title vs. Frankie Edgar (08/2013): UFC lightweight champion Benson Henderson puts his title on the line later this month against the only fighter to beat him the past six and a half years. But first, see how he won the title in the video inside.

UFC 162's Edson Barboza: Frankie Edgar's team proved missing puzzle piece (06/2013): As Brazilian striking specialist Edson Barboza puts the finishing touches on the preparations for his upcoming UFC 162 appearance, he's brimming with confidence. After all, 13 fights into his MMA career, the knockout artist believes he's finally found all the answers – or at least, "The Answer."

UFC 156 headed for Las Vegas with Jose Aldo vs. Frankie Edgar main event (10/2012): As if local fight fans didn’t have enough to look forward to with December’s UFC 155, the world’s largest mixed martial arts promotion revealed details about the local pay-per-view card that will follow.

Jose Aldo vs. Frankie Edgar Will Headline UFC 153 in Brazil (08/2012): Frankie Edgar has a chance to become a UFC champion once again.