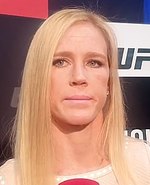 Holly Rene Holm-Kirkpatrick (born October 17, 1981) is an American mixed martial artist who competes in the Ultimate Fighting Championship. She is the former UFC Women's Bantamweight Champion, and a former professional boxer and kickboxer. She was a multiple-time world champion in boxing, defending her titles 18 times in three weight classes, and a two-time Ring magazine fighter of the year (2005, 2006). She is ranked by BoxRec as the second best female professional boxer of all time. She has the notable distinction of being the first (and currently only) fighter to hold a world-boxing title and a UFC title. More about Holly Holm

Current items with a signature of Holly Holm

These are the most current items with a signature of Holly Holm that were listed on eBay and on other online stores - click here for more items.

Traded items with a signature of Holly Holm

Most recently, these items with a signature of Holly Holm were sold on eBay - click here for more items.

'I think about doing both': Why Holly Holm is dreaming about boxing for the firs (05/20/22): Holly Holm's fighting legacy is undeniable, but could the former UFC and boxing champ look to reclaim belts in both disciplines before her career is over?

UFC Fight Night: Holly Holm returns from lengthy layoff once again on the cusp o (05/19/22): Holm, 40, could be nearing yet another opportunity at the bantamweight crown with a win over Ketlen Viera this weekend

UFC divisional rankings: Holly Holm, Germaine de Randamie move up at 135 after b (10/2020): Holm and de Randamie picked up impressive UFC Fight Night victories to move up the rankings

Irene Aldana out of scheduled UFC Fight Night main event vs. Holly Holm after po (07/2020): Aldana tested positive for the coronavirus, forcing the UFC to postpone her fight with Holm

Ariel Helwani's MMA Show to feature Jorge Masvidal, Holly Holm (01/2020): Who's next for Jorge Masvidal? The Helwani Show will cover that topic with "Gamebred," while Holly Holm will discuss her UFC 246 win.