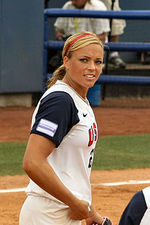 Jennie Lynn Finch Daigle (born September 3, 1980) is an American former softball player. She played for the Arizona Wildcats softball team from 1999 to 2002, where she won the 2001 Women's College World Series and was named collegiate All-American. Later she led the United States women's national softball team to the gold medal at the 2004 Summer Olympics and the silver medal at the 2008 Summer Olympics. She also pitched for the Chicago Bandits of the National Pro Fastpitch from 2005 to 2010. More about Jennie Finch

Current items with a signature of Jennie Finch

These are the most current items with a signature of Jennie Finch that were listed on eBay and on other online stores - click here for more items.

Traded items with a signature of Jennie Finch

Most recently, these items with a signature of Jennie Finch were sold on eBay - click here for more items.

U.S. Olympian Jennie Finch shares golden moment with ailing player (12/13/14): No one was happier than Danielle Ponsiglione, a player for the College of Staten Island for the past four years. Finch has been her idol for years.

Softball star Jennie Finch packs them in at York's Santander Stadium (08/06/14): More than 3,000 tickets had already been sold to Wednesday's York Revolution game before the gates even opened.

Jennie Finch, the Life of a Legend (01/2014): Marianna, FL --- Softball superstar Jennie Finch speaks on her incredible experiences in her sport, being a role model for young females, and reflects on how chasing her passion made her dreams come true.

Olympian Jennie Finch to speak at Binghamton University (12/2013): A tent fire Wednesday afternoon in the encampment known as the Jungle left one man seriously burned. - 8:35 pm

US Olympian, Jennie Finch, represents her sport in the CSRA (10/2013): Former Olympian and outstanding softball player Jennie Finch has completed an impressive career, but is hardly finished as a major representative for her sport.

Jennie Finch says softball deserves a spot in the Olympics (09/2013): Wrestling figures to be the big winner Sunday when the International Olympic Committee votes to add a sport to the roster at the 2020 Summer Games.

The Bonus: Why MLB hitters can't hit Jennie Finch and science behind reaction ti (07/2013): From THE SPORTS GENE, by David Epstein. Reprinted by arrangement with Current, an imprint of Penguin Group (USA) Inc. Copyright © 2013 by David Epstein.

Softball star, ex-Fresnan Jennie Finch makes a different pitch (10/2012): It's not unusual to see professional athletes from football, basketball, baseball and even golf in national television commercials. Having a softball star in a TV ad seems rare.

Jennie Finch: I'm Having a Baby Girl (08/2012): The Olympic softball star's third child, due in January, will be her and husband Casey Daigle's first daughter