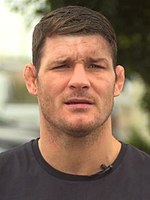 Michael Gavin Joseph Bisping (/ˈbɪspɪŋ/ BIS-ping; born 28 February 1979) is an English sports analyst, actor, commentator and retired mixed martial artist, who competed in the Middleweight and Light Heavyweight division of the UFC. A professional competitor since 2004, he is a former UFC Middleweight Champion, a former Cage Rage Light Heavyweight Champion and The Ultimate Fighter 3 Light Heavyweight tournament winner. At UFC 78, he became the first British fighter to compete in a UFC main event. At UFC 199, he became the first British fighter to win a UFC Championship and he remains the sole British winner of a UFC title. He was inducted into the UFC Hall of Fame on 5 July 2019. More about Michael Bisping

Current items with a signature of Michael Bisping

These are the most current items with a signature of Michael Bisping that were listed on eBay and on other online stores - click here for more items.

Traded items with a signature of Michael Bisping

Most recently, these items with a signature of Michael Bisping were sold on eBay - click here for more items.

Michael Bisping: Chris Weidman really did a number on Anderson Silva (02/05/15): UFC middleweight Michael Bisping said he initially was in “utter disbelief” that ex-champ Anderson Silva had tested positive for two steroids. He went to several media outlets to confirm it was actually true.Filed under: Featured, News, UFC, Videos

UFC: Gegard Mousasi 'happy to be fighting legend Dan Henderson' but has Michael (12/2014): Middleweight is relishing the prospect of taking on "legend" Dan Henderson in Stockholm on Jan 24, writes Gareth A Davies

Michael Bisping: highlights of UFC star ahead of his fight with Luke Rockhold on (10/2014): The man they call The Count will take on American Luke Rockhold in Sydney on November 8, and he is ready to rumble

Michael Bisping finally has dance partner for UFC Fight Night 55 (09/2014): Michael Bisping will finally get his much desired match with Luke Rockhold.

What's next? Cung Le addresses UFC career prospects after Michael Bisping headli (07/2014): Cung Le joked earlier this year that as a veteran, he’d be much better suited to one-round fights than five. But now that he’s booked for a headliner opposite Michael Bisping, he better well adjust to the extra time. Filed under: News, UFC

After callout, Michael Bisping open to fight with UFC 172 winner Luke Rockhold (04/2014): Even after a defeat, Michael Bisping is a preferred opponent for many UFC middleweights. But it appears “The Count” has found one he’d like to fight.Filed under: MMA Rumors, News, UFC Tagged: UFC 172

For Michael Bisping, temporary loss of vision provided clear view of future (10/2013): MANCHESTER – In six months, Michael Bisping said he should be back inside the cage, fighting toward a title that's eluded him in seven years with the UFC. Right now, though, his progress is measured in smaller increments.

UFC Manchester: Michael Bisping out of Mark Munoz headliner with eye injury and (09/2013): Briton, who could be out for up to six months, will be replaced by former UFC light-heavyweight champion Lyoto Machida.

UFC 159′s Michael Bisping: ‘I fight better when I’m angry’ (04/2013): NEWARK — He’s back. After an absence of nearly a year and a half. True, Michael Bisping competed in the UFC as recently as January, but that wasn’t the real Bisping. And I say that not because he was knocked out by a Vitor Belfort head kick.

Michael Bisping (02/2013): Nicknamed "The Count", Michael Bisping is the most successful British fighter in the UFC. A winner of the UFC's reality show, The Ultimate Fighter, Bisping has also coached twice on the show and is considered one of the world's premier middleweight contenders.