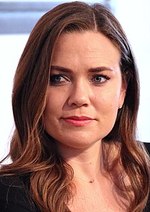 Natalie Anne Coughlin Hall (born August 23, 1982) is an American former competition swimmer and twelve-time Olympic medalist. While attending the University of California, Berkeley, she became the first woman ever to swim the 100-meter backstroke (long course) in less than one minute—ten days before her 20th birthday in 2002. At the 2008 Summer Olympics, she became the first U.S. female athlete in modern Olympic history to win six medals in one Olympiad, and the first woman ever to win a 100-meter backstroke gold in two consecutive Olympics. At the 2012 Summer Olympics, she earned a bronze medal in the 4×100-meter freestyle relay. More about Natalie Coughlin

Current items with a signature of Natalie Coughlin

These are the most current items with a signature of Natalie Coughlin that were listed on eBay and on other online stores - click here for more items.

Traded items with a signature of Natalie Coughlin

The most expensive item with a signature of Natalie Coughlin (NATALIE COUGHLIN SIGNED 11X14 PHOTO PSA/DNA USA OLYMPIC SWIMMING TEAM GOLD 3) was sold in February 2018 for $124.99 while the cheapest item (NATALIE COUGHLIN autograph OLYMPICS signed 3-192) found a new owner for $0.98 in July 2010. The month with the most items sold (35) was August 2008 with an average selling price of $20.50 for an autographed item of Natalie Coughlin. Sold items reached their highest average selling price in August 2015 with $109.06 and the month that saw the lowest prices with $0.99 was October 2010. In average, an autographed item from Natalie Coughlin is worth $15.50.

Most recently, these items with a signature of Natalie Coughlin were sold on eBay - click here for more items.

Natalie Coughlin to lead strong swimming team at Pan Ams (03/08/15): Walnut Creek's Natalie Coughlin plans to use the Pan American Games as a stepping stone to what could be a historic Olympic performance

Natalie Coughlin: Loving It More than Ever (12/02/14): And if she would have had the meet she envisioned at the 2012 Olympic Trials, made the Olympic team in multiple events and gone on to win numerous medals in London, she most likely would be done – hosting her own cooking show or taking photographs around the world, maybe even starting a family.

U.S. swimmer Natalie Coughlin says she’s ‘all in’ for fourth Olympics in 2016 (11/25/14): With one more Olympic medal, she would become most-decorated female U.S. athlete of all time.

Race Video: Natalie Coughlin Compete in Favorite Event ' 100 IM (11/2013): BOLZANO, Italy, November 11. USA's Natalie Coughlin has always said her favorite race ever is the 100 IM, and she had the chance to compete in it again at the Bolzano International Swim Meeting this ...

Olympian Natalie Coughlin's gene pool: American as Americans get (10/2013): Coughlin's roots in the country go back to shortly after the arrival of the Mayflower; both parents were 13th-generation Americans.

Video Interview Natalie Coughlin: Biggest Personalities are in 50 Free (06/2013): INDIANAPOLIS, Indiana, June 30. CAL Aquatics Natalie Coughlin talks about her win in the 50 freestyle at the 2013 USA Swimming national championships. She says that it is "weird" to only be competing ...

Healthy Hollywood: Natalie Coughlin's Nutritional Splash! (04/2013): Olympic medalist Natalie Coughlin tells Healthy Hollywood that dried plums are one of her favorite go-to powerhouse foods. Alongside nutritionist Leslie Bonci, Natalie teamed up with The California Dried Plum Board to get these fruits on people's wellness radar!

Olympic swimmer Natalie Coughlin visits Richmond Tibetan center (03/2013): Natalie Coughlin , a 30-year-old UC Berkeley grad who was born in Vallejo and lives in Lafayette, gave an inspirational talk to about 25 parents and children at the Tibetan Association of Northern California's community center in Richmond on Wednesday night.

Olympian Natalie Coughlin runs contest winner through killer workout in Pleasant (10/2012): Renea Cribbs, 57, recently won a 'Train With Natalie' competition that brought her from her home in North Richland Hills, Texas, to California for a mini-vacation and an Olympic-style workout.

Natalie Coughlin ties medals record, but doesn't swim final (07/2012): Coughlin had the fastest split for the U.S. in the preliminary heat of the women's 4x100 freestyle relay. But she was left off the team.