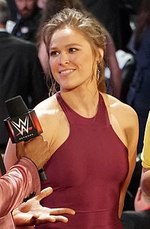 Ronda Jean Rousey (/ˈraʊzi/; born February 1, 1987) is an American professional wrestler, actress, former judoka and mixed martial artist. She is currently signed to WWE, where she performs on the SmackDown brand. She is best known for her time in the Ultimate Fighting Championship (UFC). Her longstanding nickname, "Rowdy", was inherited from professional wrestler Roddy Piper. More about Ronda Rousey

Current items with a signature of Ronda Rousey

These are the most current items with a signature of Ronda Rousey that were listed on eBay and on other online stores - click here for more items.

Traded items with a signature of Ronda Rousey

The most expensive item with a signature of Ronda Rousey (WWE RONDA ROUSEY RING WORN HAND SIGNED AUTOGRAPHED JACKET WITH COA FROM THE WWE) was sold in October 2020 for $4999.99 while the cheapest item (Topps Slam DIGITAL, Ronda Rousey, Undisputed Signature) found a new owner for $0.99 in March 2020. The month with the most items sold (26) was March 2013 with an average selling price of $72.99 for an autographed item of Ronda Rousey. Sold items reached their highest average selling price in January 2013 with $810.00 and the month that saw the lowest prices with $4.38 was March 2017. In average, an autographed item from Ronda Rousey is worth $51.00.

Most recently, these items with a signature of Ronda Rousey were sold on eBay - click here for more items.

2022 WWE Royal Rumble: Lesnar's revenge, Rousey's return and more (01/30/22): With Lesnar and Ronda Rousey winning at the Royal Rumble, the question now is -- who will they face at WrestleMania 38? We break down everything that happened in St. Louis.

A lapsed fan's guide to the 2022 Royal Rumble: Will Ronda Rousey return? (01/27/22): Saturday's Royal Rumble event will have a huge role in setting up WrestleMania 38. Here's what you need to know.

Miesha Tate's perfect 2022: A title, Holly Holm and Ronda Rousey (11/17/21): If Saturday's fight with Ketlen Vieira goes to plan, Miesha Tate has her eye on three of the sport's legends next year.

MMA anniversary: How Ronda Rousey vs. Liz Carmouche impacted Amanda Nunes and ot (02/23/21): On the anniversary of the UFC's first women's fight, Nunes and other top female fighters reflect on the impact of that event.

Worst UFC predictions and picks from the last five years: Conor McGregor, Ronda (06/2020): The CBS Sports team took a look back at some of their biggest misses in picking fights of late

Rousey: Fans part of reason for leaving WWE (04/2020): Ronda Rousey says her relationship with fans played a part in her decision to walk away from WWE.

From the archives: The story behind Ronda Rousey's UFC return (03/2020): Before Ronda Rousey could return to the Octagon, she had to answer a simple question: Why should she?

Ronda Rousey-Liz Carmouche: The fight that changed women's MMA (12/2019): Amanda Nunes and other top female MMA fighters reflect on an event that helped pave the way for their careers.

Mortal Kombat 11 may feature Ronda Rousey—but not as herself (01/2019): If you've been wondering who'd win in a fight between Ronda Rousey and Sub-Zero, it looks like you may get an answer—sort of.

Kayla Harrison on transition from Judo to MMA, not being like Ronda Rousey and b (12/2018): Kayla Harrison talks to Sporting News about a variety of topics ahead of her fight on New Year's Eve at PFL 11.

Furious 7 Star Ronda Rousey Dishes on Fighting in Heels in Epic Fight Scene with (04/2015): Rousey was inspired by DWTS!

Ronda Rousey signs long-term contract extension with UFC (03/2015): The women's bantamweight champion has finished seven of her 11 opponents in under a minute with only one fight going beyond the first round.

UFC star Ronda Rousey rooting for Pacquiao vs Mayweather (02/2015): Ronda Rousey may have her hands full for UFC 184 but she's also focused on another fight.

Coach says Ronda Rousey is 'sadistic' (12/2014): Why is UFC champ Ronda Rousey so successful? According to her coach, part of it is because she's 'sadistic.'

Ronda Rousey Signs First Apparel Endorsement (10/2014): UFC bantamweight champion Ronda Rousey has officially signed her first apparel endorsement deal. On Thursday, Buffalo David Bitton and Rousey announced their decision for Ronda to be the first and only woman to represent Buffalo Pro “It’s such an amazing …

Ronda Rousey dominates UFC (09/2014): Ronda Rousey is at the top of her UFC career. Dana White has given Rousey all her blessings. Her biggest competitor Gina Canaro has left the fight to work in the movies. Can anything stop Rousey from...

How MMA Fighter Ronda Rousey Gets Down To Her Fighting Weight (07/2014): Kelefa Sanneh of the New Yorker wrote an...

Ronda Rousey putting movie career on hold for UFC 175 (05/2014): Ronda Rousey planned to spend the past few days with relative relaxation before immersing herself in a fight camp. The UFC women’s bantamweight champion at least didn’t expect to stray far from her Southern California home. Then executives from her second budding career came calling ...

Ronda Rousey Calls Cyborg An ‘It’ (04/2014): In a recent interview with Yahoo Sports, Ronda Rousey made an alleged homophobic/transphobic comment about Cris Cyborg, calling her an ‘it’ rather than a woman. “This girl has been on steroids for so long and [has been] injecting herself for …

Watch Ronda Rousey Dismantle Comedian Pete Holmes (02/2014): If you’ve ever thought to yourself, “I might be able to take Ronda Rousey,” you’re wrong. You just… are, unless you’re a professional MMA fighter or have found a way to have Tank from the Matrix implant jiu-jitsu skills into your brain.

Ronda Rousey on Sexualization in the UFC (11/2013): The Ultimate Fighter coach doesn't read about herself

UFC’s Miesha Tate Expresses Her Disdain For Ronda Rousey (09/2013): These two legends of women’s MMA are forever joined together in a legacy of personality clashes reminiscent of Ali and Frasier.

Ronda Rousey 'Breaking Ground' documentary premieres Monday on FOX Sports 1 (08/2013): Just in time for one final buildup toward Season 18 of "The Ultimate Fighter," FOX Sports 1 this Monday will premiere a documentary on one of the UFC's biggest stars – Ronda Rousey.

Ronda Rousey, MMA Fighter, Will Star In “Expendables 3″ (07/2013): Ronda Rousey has quickly moved up in the world of Mixed Martial Arts to become one of its biggest stars, but now she’s moving on to other pursuits; namely, the movies. Rousey has signed on to work with Sylvester Stallone …

B&C Morning Show: Ronda Rousey Displays Her Brawn And Beauty (04/2013): Ronda Rousey has made quite a name for herself in the world of MMA.

Ronda Rousey makes historic UFC debut in Anaheim (02/2013): Ronda Rousey has an Olympic judo medal, an undeniable personal magnetism and a merciless string of victories in her short mixed martial arts career.Now she's finally got a showcase worthy of her talent.Rousey ...