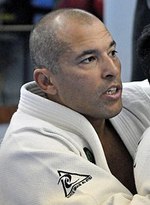 Royce Gracie (Portuguese: ; born 12 December 1966) is a Brazilian retired professional mixed martial artist, a UFC Hall of Famer, and a Gracie Jiu-Jitsu practitioner. A member of the Gracie family, he is considered to be one of the most influential figures in the history of mixed martial arts (MMA). He also competed at PRIDE Fighting Championships, K-1's MMA events and at Bellator. More about Royce Gracie

Current items with a signature of Royce Gracie

These are the most current items with a signature of Royce Gracie that were listed on eBay and on other online stores - click here for more items.

Traded items with a signature of Royce Gracie

Most recently, these items with a signature of Royce Gracie were sold on eBay - click here for more items.

UFC legend Ken Shamrock says he was 'obsessed' with revenge fight against Royce (11/21/14): Legendary American recalls his defeat to his Brazilian foe in UFC 1 way back in 1993

Royce Gracie Jiu-Jitsu Academy of Michigan in Southgate offers safe learning env (11/21/14): When you’ve done something for more than four decades, it probably becomes more of a passion than a job.

Please, Royce Gracie, stop making it so hard to remember you fondly (03/31/14): On a weekend where it should have been another Gracie occupying the spotlight, early UFC hero Royce Gracie once again makes himself the center of attention, and for all the wrong reasons.Filed under: Featured, News Tagged: Eddie Bravo, Royce Gracie

Royce Gracie: On a quest to uncover the UAE's Jiu Jitsu talent (01/2014): By 18 he was already a black belt and was helping pass on his knowledge as he moved to America to teach ‘Gracie Jiu Jitsu’. A hugely successful career within the sport of MMA followed but his true passion is teaching the Martial Art that his father perfected back in Rio de Janeiro.

UFC 20: Royce Gracie (10/2013): He is the man that started it all, winning three bouts in one night on November 12, 1993 to win the first UFC tournament and basically give birth to a new sport in the United States. 20 years later, Royce Gracie looks at the UFC’s past and present . . .