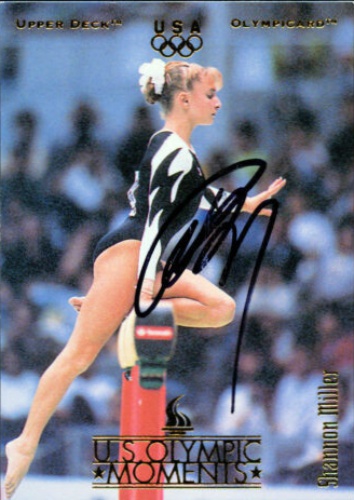 Current items with a signature of Shannon Miller

These are the most current items with a signature of Shannon Miller that were listed on eBay and on other online stores - click here for more items.

Traded items with a signature of Shannon Miller

The most expensive item with a signature of Shannon Miller (SHANNON MILLER WORN & AUTOGRAPHED LEOTARD +SIGNED PHOTO) was sold in July 2008 for $350.00 while the cheapest item (SHANNON MILLER SIGNED 8X10 IN PERSON OLYMPIC GYMNASTICS) found a new owner for $0.01 in March 2010. The month with the most items sold (18) was December 2010 with an average selling price of $5.34 for an autographed item of Shannon Miller. Sold items reached their highest average selling price in February 2020 with $49.99 and the month that saw the lowest prices with $0.99 was June 2010. In average, an autographed item from Shannon Miller is worth $9.99.

Most recently, these items with a signature of Shannon Miller were sold on eBay - click here for more items.

Oklahoman Shannon Miller Talks About Her Battle With Cancer (03/24/15): She is the most decorated gymnast in American history and she was part of the 1996 gymnastics team known as the Magnificent 7. Today, she's a wife a mother, a business woman and a cancer survivor.

Shannon Miller: Chancellor's Reasons To Not Re-Sign 'Ring Hollow' (02/25/15): The coach of the UMD women's hockey team took issue Wednesday with reasons given by Chancellor Lendley Black for not renewing her contract.

UMD coach Shannon Miller speaks out about losing job (02/2015): Shannon Miller never imagined the puck would drop like this. After helping build the Bulldogs women's hockey team into a powerhouse--she's on defense--like she's never been before.

Who Does Shannon Miller Think of 'Every Time I Look at My Daughter'? (09/2014): The Olympic gold medal-winning gymnast has been cancer-free for three years

Shannon Miller Moving to Little Rock - Audrey Esther Joining KOLR10 Daybreak (07/2014): KOLR10 - Audrey Esther joins the KOLR10 News family as a morning anchor on Daybreak.  She joins Shannon Miller, who will be leaving KOLR10 July 25 to work for our sister station,  KARK in Little Rock. Shannon talks about her big move and Audrey tells us about her long history in Springfield.

Green Rainbow Revolution Partners with Shannon Miller Lifestyle: Mother's Day $1 (05/2014): Going back to work after having a new baby can be tough. The Mother's Day Giveaway includes items that help make this transition easier. (PRWeb May 07, 2014) Read the full story at http://www.prweb.com/releases/Green_Rainbow_Revolution/Shannon_Miller_Giveaway/prweb11832896.htm

Gainesville Elder Law Attorney Shannon Miller Helps Develop Bill to Protect the (03/2014): House Bill 409 proposes to create a “presumption of exploitation” to help prosecute individuals who take advantage of elderly or disabled adults. This bill is the first of its kind. (PRWeb March 19, 2014) Read the full story at http://www.prweb.com/releases/2014/03/prweb11684441.htm

ScholarShare's Speaker Series Features Shannon Miller (11/2013): Shannon Miller, the most decorated gymnast in U.S. history, is the featured speaker at the fifth event of the 2013 ScholarShare Speaks speaker series. The event, "Winning Every Day with Shannon Miller: ...

Olympic medalist Shannon Miller now winning medals outside Olympics (09/2013): WASHINGTON – A seven-time Olympic medalist who has dedicated her life to health is now involved in another endeavor and continues...

Olympic gold medalist Shannon Miller to speak at women's health expo (04/2013): Shannon Miller has been one of the most-decorated American gymnasts in history and is known for overcoming many obstacles, including one that extends beyond the balance beam, the battle against cancer.

Expecting again, Olympian Shannon Miller talks about staying healthy post cancer (03/2013): At 36, U.S. Olympics hall-of-famer and gold medal gymnast Shannon Miller is expecting her second child, and found out she's having a girl on her appearance on "The Doctors."

Stow gymnasts inspired by Olympic golden girl Shannon Miller (01/2013): None of the nearly 100 young gymnasts, who packed part of 10.0 Academy of Gymnastics in Stow last Thursday were alive when gymnast Shannon Miller won a U.S. record five medals at the 1992 Olympics games in Barcelona, Spain.

Amateur Update column: It's an honor to host Shannon Miller (12/2012): We are now in the process of selecting the finalists for the upcoming Rochester Area Sports Banquet. This is an annual event where we honor the top amateur athletes, teams, coaches and organizations from our area based on their accomplishments

Shannon Miller talks about competing with cancer (10/2012): Shannon Miller likes to defy the odds in the pursuit of greatness. She badly dislocated her elbow as a promising rookie gymnast in 1992. Just three months later, she dominated the U.S. Olympic trial competition, then she won an astounding five medals at the Barcelona Games.

Shannon Miller: Downgrading is tough – but it's part of the sport (07/2012): Last night's decision to demote the Great Britain men's gymnastics team from silver to bronze medallists may have been unpopular but it was correct.