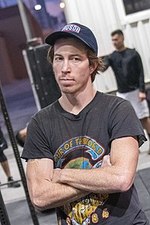 Current items with a signature of Shaun White

These are the most current items with a signature of Shaun White that were listed on eBay and on other online stores - click here for more items.

Traded items with a signature of Shaun White

The most expensive item with a signature of Shaun White (Rare Burton Snowboard Autographed by Shaun White w/ COA) was sold in March 2011 for $1200.00 while the cheapest item (SHAUN WHITE SIGNED 11X14 PHOTO OLYMPIC GOLD) found a new owner for $0.01 in March 2010. The month with the most items sold (31) was March 2010 with an average selling price of $29.99 for an autographed item of Shaun White. Sold items reached their highest average selling price in January 2018 with $559.49 and the month that saw the lowest prices with $1.00 was May 2008. In average, an autographed item from Shaun White is worth $50.00.

Most recently, these items with a signature of Shaun White were sold on eBay - click here for more items.

At his fifth Olympics, Shaun White is still snowboarding's greatest competitor (02/08/22): For perhaps the first time in his career, White is not the favorite to win Olympic gold. But don't count him out.

Replacing Derrick White a team affair (02/2019): Just in time to start their annual playoff push, the Spurs must band together to overcome the loss of their starting point guard to plantar fasciitis

Shaun White Calls Out Passenger's Plane Etiquette After Fellow Flyer Puts Their (12/2018): The Olympic snowboarder shared the disturbing video to his Instagram on Friday

Shaun White’s Air + Style Makes First U.S. Stop As Athletes, Artists Draw Thousa (02/2015): As the sun went down and the lights came up at the Rose Bowl Saturday night, not even Diplo could hold the crowd's full attention at Shaun White's Air + Style.

Olympian Shaun White is surprising some lucky fans (01/2015): Gold metal Olympic Champion and entrepreneur Shaun White is back in his hometown of Encinitas to giveaway tickets to his action packed "Air + Style" event in Pasadena on Feb. 21-22.

Review: Oakley A Frame Shaun White 2.0 (09/2014): The A Frame has been an iconic example of Oakley’s dedication to high quality skiing eyewear for years. Renowned for its comfort and fog combatting abilities, it’s easy to see why it has been so popular on the slopes and pistes.

Oakley Enduro Newest Additional to Shaun White Sunglasses Collection (03/2014): Shaun White’s achievements are too many to mention here. Suffice it to say that since the snowboarding prodigy first forged a relationship with Oakley, he’s… via Emag.co.uk

Shaun White's band goes for gold (02/2014): The Sochi Olympics are over and legendary American snowboarder Shaun White returned without another gold medal.

Shaun White's snowboard slopestyle rival Mark McMorris feels 'pretty good' desit (01/2014): Mark McMorris' fractured rib is steadily improving, so much so that the gold-medal favorite in Sochi plans to snowboard in a few days to ''see how it goes.''

Shaun White like you've never seen him before (12/2013): Snowboard flips with a GoPro are amazing and slightly nauseating. Hey, friend. If you're feeling motion sickness, please close you're eyes and the feeling should pass.

Shaun White soaring high 'Down Under' training in private halfpipe again (10/2013): Shaun White's sponsor GoPro has sculpted a private halfpipe in Australia for the snowboarder as he trains for the Sochi Winter Olympics. Photo courtesy to The Denver Post by GoPro.

Video: Shaun White: I get the same rush from music as snowboarding (09/2013): In this "CBS This Morning" Extra, Olympic snowboarder and front man for his new band Bad Things, Shaun White, compares the rush of performing for a crowd on a snowboarder and with a guitar.

Snowboarder Shaun White brings Bad Things to the Frequency (07/2013): White, an Olympic gold medal winner and a fixture at the X Games, started a tour with the Los Angeles rock band Bad Things in mid-June.

Shaun White not satisfied, vows to step up game for Sochi Olympics (01/2013): ASPEN, Colo. (AP) -- Shaun White already soars higher in the superpipe than everyone else and lands complicated tricks with an ease that draws admiration from even his opponents.

Shaun White Lops Off His Long Locks for Charity (12/2012): The Olympic snowboarder donates several inches of hair to Locks of Love

Shaun White Talks Hotel Meltdown: Don't Make Your Mistakes Too Big (10/2012): Shaun White was already sorry for his antics at a Nashville hotel that led to him getting busted for vandalism and public intoxication last month. And now, the snowboarding hero has a...

Shaun White Sets Aside Skateboard To Focus On Winter Olympics (08/2012): After returning to the Olympics as a commentator, White sets sights on 2014 Winter Games.