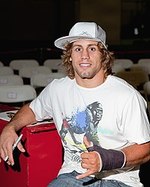 Urijah Christopher Faber (born May 14, 1979) is an American mixed martial artist and actor who is signed to the Ultimate Fighting Championship. He competed as a bantamweight and formerly competed as a featherweight. He is also the founder of Team Alpha Male. More about Urijah Faber

Current items with a signature of Urijah Faber

These are the most current items with a signature of Urijah Faber that were listed on eBay and on other online stores - click here for more items.

Traded items with a signature of Urijah Faber

Most recently, these items with a signature of Urijah Faber were sold on eBay - click here for more items.

Urijah Faber in his own words: Why I fight at 40 (12/07/19): Urijah Faber will be the oldest athlete competing at UFC 245, and he credits that to a combination of delusion and foresight.

Frankie Edgar on Urijah Faber: Why not give a superfight to the fans? (03/08/15): Is it a superfight? Frankie Edgar sure thinks so. After all, if two of the biggest stars of the UFC’s lighter weight classes are coming together, why wouldn’t it be?Filed under: Featured Videos, News, UFC, Videos

With Dominick Cruz back in UFC mix, Urijah Faber rivalry again heats up (09/2014): It appears Dominick Cruz’s three-year layoff has done little to weaken his rivalry with Urijah Faber and the rest of the Team Alpha Male camp.Filed under: News, UFC, Videos

Video: Urijah Faber wants to lead with anti-PED stance, clean lifestyle (08/2014): Urijah Faber likes to lead by example, and he thinks his career philosophy, which includes a stance against performance-enhancing drugs and leading a clean lifestyle, is starting to pay off for his followers.Filed under: Featured Videos, News, UFC, Videos

Urijah Faber remains committed to full-contact skydiving – even though it's fake (06/2014): With more than 1.2 million views on YouTube, it appears Full Contact Skydiving could prove an instant sporting sensation – if it were real.Filed under: Featured, News, UFC, Videos

UFC Fight Night 41's Iuri Alcantara hopes for future rematch with Urijah Faber (05/2014): Iuri Alcantara had Urijah Faber in some compromising positions this past August. Now that he’s had a taste of what it would be like to defeat Faber, he wants a rematch to finish the job. Filed under: MMA Rumors, News, UFC

Manager: Urijah Faber fought Barao with bruised knee ligament, partially torn ha (02/2014): The bad training camp that UFC bantamweight Urijah Faber referred to in the wake of his UFC 169 loss to champion Renan Barao was the result of short notice and multiple injuries, his manager today told MMAjunkie.Filed under: News, Only on Junkie, UFC Tagged: UFC 169, (...)

Michael McDonald, Urijah Faber both out to prove their worth at UFC on FOX 9 (10/2013): Michael (Mayday) McDonald and Urijah (The California Kid) Faber were forced to reevaluate their respective approaches to fighting following losses to interim bantamweight champ Renan (Barao) Pegado.

Urijah Faber, Phil Davis hope MMA Draft, combine help boost amateur MMA (06/2013): Included in this week's UFC Fan Expo in Las Vegas will be an event a pair of UFC elite fighters hope takes MMA to the next level. The first MMA Draft Combine takes place Saturday as part of the Expo and is an opportunity for amateur fighters to get noticed a little bit quicker.

UFC 149 Results : Renan Barao wins Interim Bantamweight Title Over Urijah Faber (10/2012): A surprisingly lackluster pay per view wasn’t matchmaker Joe Silva’s fault. Sometimes things just don’t turn out the way one expects them to. Starting off the pay per view was a welterweight matchup between Matthew Riddle and Chris Clements.

MMA Fighter Urijah Faber Talks About UFC 152 (09/2012): Urijah talks about how he got into MMA, UFC 152, which is happening on Sept. 22nd, his sister’s miraculous recovery from her horrifying car accident, his rigorous training regiment, and his new book. He also [...]