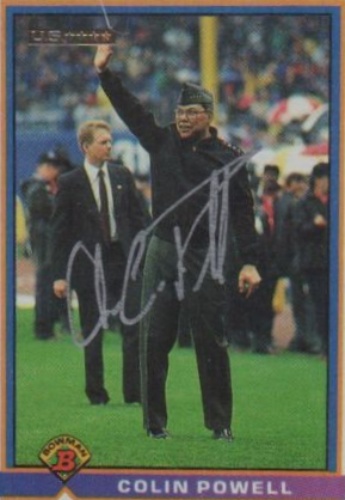 Current items with a signature of Colin Powell

These are the most current items with a signature of Colin Powell that were listed on eBay and on other online stores - click here for more items.

Traded items with a signature of Colin Powell

The most expensive item with a signature of Colin Powell (General Colin Powell Signed G.I. Joe Historical Commanders 12 Action Figure BAS) was sold in December 2022 for $999.99 while the cheapest item (colin powell: my american journey signed 1cent L@@k) found a new owner for $0.01 in November 2009. The month with the most items sold (270) was October 2021 with an average selling price of $49.92 for an autographed item of Colin Powell. Sold items reached their highest average selling price in June 2018 with $149.99 and the month that saw the lowest prices with $0.99 was November 2018. In average, an autographed item from Colin Powell is worth $24.47.

Most recently, these items with a signature of Colin Powell were sold on eBay - click here for more items.

Colin Powell to speak at graduation (03/18/15): The Rice University administration announced Wednesday that former Secretary of State and Chairman of the Joint Chiefs of Staff General Colin Powell will deliver this year’s commencement address on May 16.

Colin Powell to speak at CNU on Thursday (03/17/15): Colin Powell, retired four-star general and former secretary of state, will speak Thursday night at the Ferguson Center for the Arts in Newport News.

Watch: Colin Powell Still Sees Dark Vein of Intolerance in GOP (03/15/15): The former secretary of state is interviewed on 'This Week.'

Colin Powell -- I'm An Independent ... When It Comes to Mayweather vs. Pacquiao (03/09/15): There's one fight retired four-star general Colin Powell wants no piece of -- and it's the upcoming fight of the century ... Floyd Mayweather vs. Manny Pacquiao. The former U.S. Secretary of State was in Washington, D.C. over the weekend when…

Colin Powell ‘shocked but not that surprised’ by Ferguson report (03/2015): The former secretary of state weighs in on a report about racial bias in the Ferguson Police Department.

Colin Powell on Cuba: Time now to turn that 'page of history' (12/2014): Former U.S. Secretary of State Colin Powell said Thursday that it's "time now to turn" the "page of history" on U.S.-Cuba relations, but that pressure on the Castro brothers will remain going into the future in the wake of the announcement that the U.S. will begin to normalize relations with ...

‘None Whatsoever’: Colin Powell Has No Buyer’s Remorse over Endorsing Obama (09/2014): Asked whether he has any buyer's remorse about endorsing President Barack Obama , former Secretary of State Colin Powell wholeheartedly said: "None whatsoever."

Colin Powell, Alma Powell and Laysha Ward: Saving one child at a time (08/2014): Every child needs a caring adult. Could you be that adult for one child?

Report: Colin Powell, others kept in dark about CIA techniques after 9/11 (07/2014): A Senate report on the CIA's interrogation and detention practices after the 9/11 attacks concludes that the agency initially kept the secretary of state and some U.S.

Colin Powell urges grads to work hard, give back (05/2014): The A's he earned in ROTC helped boost his GPA to 2.0 -- enough for him to graduate 56 years ago. "School officials said, 'That's good enough for government work. Get him out of here and we'll never see him again.'"

Colin Powell advises Worcester Tech students to do their best every day (03/2014): WORCESTER and#8212; If you're in the market for a motivational speaker to stress the importance of getting good grades in school, don't hire retired Gen. Colin L. Powell.

Clayton Carpenter's pastor: 'We were going to have another Gen. Colin Powell' in (01/2014): Army Capt. Clayton Carpenter, a Lakeland High School graduate who died last week in a Blackhawk helicopter training accident in Savannah, Ga., will be buried in Arlington National Cemetery after family and friends gather for a funeral expected to be held Saturday in Shrub Oak.

Colin Powell reunites with YRP pilot who saved his life (11/2013): Royes is the chief pilot for Air 2 — the York Regional Police helicopter — but in the early '90s he was a Jamaican military pilot.

Colin Powell at Cal U: We must educate, inspire youths for leadership (09/2013): By Joe Napsha, Tribune-Review For four-star Gen. Colin Powell, educating the nation’s youth and increasing diversity are important to the nation’s future as demographics change. “In another generation, the ...

Colin Powell to visit Union City school named after him (05/2013): The first African American to serve as secretary of state, Colin Powell will speak to students and the media on Tuesday

Colin Powell, Former Secretary of State, b. 1937 (03/2013): Ihad the nicest bike on Kelly Street, and I rode that thing everywhere—Pelham Bay Park, Orchard Beach, you name it, I rode it. The trolley car went right by my house on 163rd Street.

Colin Powell Tells Fox News' Bill O'Reilly Why He Voted For Obama Twice (01/2013): In an exclusive and wide-ranging interview on Tuesday, Fox News’ Bill O’Reilly asked former Secretary of State Colin Powell how he could vote for President Barack Obama twice as a Republican.

Kofi Annan's memoir: Did Colin Powell doubt his own WMD claims? (08/2012): The former U.N. secretary-general says the former secretary of State was always skeptical of the evidence he used to justify the war in Iraq

Colin Powell Students Look To Bright Future (07/2012): It was a big day on Wednesday for the 121 eighth graders at Colin Powell Academy, as they were promoted into the next stage of their lives — high school.