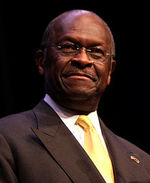 Herman Cain (December 13, 1945 – July 30, 2020) was an American businessman and activist for the Tea Party movement within the Republican Party. Born in Memphis, Tennessee, Cain grew up in Georgia and graduated from Morehouse College with a bachelor's degree in mathematics. He then earned a master's degree in computer science at Purdue University while also working full-time for the U.S. Department of the Navy. In 1977, he joined the Pillsbury Company where he later became vice president. During the 1980s, Cain's success as a business executive at Burger King prompted Pillsbury to appoint him as chairman and CEO of Godfather's Pizza, in which capacity he served from 1986 to 1996. More about Herman Cain

Current items with a signature of Herman Cain

These are the most current items with a signature of Herman Cain that were listed on eBay and on other online stores - click here for more items.

Traded items with a signature of Herman Cain

Most recently, these items with a signature of Herman Cain were sold on eBay - click here for more items.

Herman Cain, former Republican presidential hopeful, has died of coronavirus, hi (07/30/20): The former pizza chain executive, who ran in the GOP presidential primaries in 2012, learned in June that he had tested positive.

How Herman Cain and President Obama Brought Down Bill Cosby (11/21/14): The allegations have been around for years. But we're only now willing to judge black icons like everybody else.

Herman Cain Campaigns for Cassidy in U.S. Senate Race (10/26/14): In a little over a week , Election Day will be here, but candidates want you to start voting now.

Sean Hannity, Herman Cain to play Orlando (09/2014): Have you ever wanted to see Sean Hannity in the flesh?

Post Partisan: Herman Cain is absolutely right … about the tea party (08/2014): ?The tea party movement is alive and well."

Herman Cain: Obama Has a Crisis of Crises (06/2014): In a short interview with Stuart Varney, ex-presidential candidate Herman Cain explained why he agrees with Brit Hume’s statement 'this presidency is failing,' and why 2014 is critical in making a difference.

Herman Cain says he might run for president again (05/2014): Cain dropped out of the 2012 campaign after allegations of multiple affairs.

Will Herman Cain help or hurt an Augusta Mayoral candidate? (02/2014): Many are asking if Cain can tip the election for Helen Blocker-Adams or will this move hurt her campaign.

It Was Huntsman's Camp That Took Out Mitch Daniels, Herman Cain (11/2013): Jon Huntsman's team fed stories about rivals to the media, according to 'Double Down.'

Herman Cain: Sexual Harassment Charges Were Orchestrated by ‘The Devil’ (10/2013): In an interview this week with RealClearReligion , Herman Cain claims that the sexual harassment allegations that derailed his 2012 presidential campaign were the work of Satan.

Herman Cain Wants to Help Everyone Get an Erection (07/2013): This represents quite the reversal for Cain, who typically tries to get everyone else to give him erections. Copyright © 2010 2013, New York Media LLC. All Rights Reserved. Vulture® and Grub Street® are registered trademarks of New York Media LLC .

Herman Cain says U.S. headed 'towards socialism and towards communism' (06/2013): Herman Cain, who ran unsuccessfully for the GOP presidential nomination in 2012, told a gathering of evangelist activists in Washington, D.C., on Saturday that they shouldn't wait until 2016 to "take our country back".

Rich Lowrie, financial planner behind Herman Cain 's '9-9-9' tax plan: Whatever (03/2013): Rich Lowrie heard Herman Cain speak at a Club for Growth conference nine years ago and introduced himself afterward. One thing led to another, and after the unknown Cain launched a longshot presidential bid, Lowrie was recruited to help formulate an economic plan.

Herman Cain Says Obama Supporters Have A "Severe Ignorance Problem" [VIDEO] (02/2013): Herman Cain is no stranger to making comments that rile up his opposing side, in fact he's become quite masterful at it. Today's installment finds the one-time presidential hopeful calling those who voted for President Obama ignorant.

Bob Costas' Football Night Gun-Control Commentary Bashed by Herman Cain, Ted Nug (12/2012): Bob Costas is being criticized by some for a commentary on gun control he delivered yesterday during halftime of Sunday Night Football. His remarks came in the wake of Kansas City Chiefs...

Herman Cain to Speak at UTPB on Thursday Evening (11/2012): He's the man behind the 999 Plan who sought out the Republican Presidential Nomination. Now he's making his way to the Permian Basin.

Herman Cain’s former lover to write a tell-all book about their 13-year affair (10/2012): Ginger White continues to campaign against the eccentric politician

TRUTH TOUR: Herman Cain Back In Iowa (08/2012): Former GOP Presidential Candidate Herman Cain is returning to Iowa next week. Cain is kicking off what he calls a...

Is Herman Cain Working On A Secret Project With Pauly Shore? (07/2012): But Romney remains steadfast in his refusal.