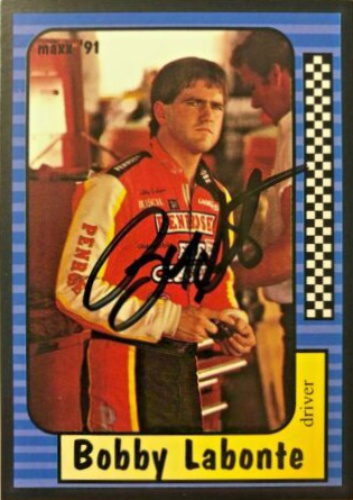 Robert Allen Labonte (born May 8, 1964) is an American semi-retired professional stock car racing driver and current analyst for NASCAR on Fox. He also currently competes full-time in the Superstar Racing Experience, driving the No. 18 car. Labonte is the 2000 NASCAR Cup Series champion. He and his older brother, Terry Labonte, are one of only two pairs of brothers to have both won the Cup championships (along with Kurt Busch and Kyle Busch). He is also the uncle of former Xfinity Series race winner Justin Labonte. More about Bobby Labonte

Current items with a signature of Bobby Labonte

These are the most current items with a signature of Bobby Labonte that were listed on eBay and on other online stores - click here for more items.

Traded items with a signature of Bobby Labonte

The most expensive item with a signature of Bobby Labonte (Bobby Labonte Autographed Coca-Cola Racing Fire Suit) was sold in June 2019 for $3500.00 while the cheapest item (SIGNED BOBBY LABONTE NASCAR PHOTO CARD AUTOGRAPHED) found a new owner for $0.01 in November 2009. The month with the most items sold (32) was March 2008 with an average selling price of $5.50 for an autographed item of Bobby Labonte. Sold items reached their highest average selling price in November 2014 with $50.00 and the month that saw the lowest prices with $0.99 was June 2015. In average, an autographed item from Bobby Labonte is worth $3.99.

Most recently, these items with a signature of Bobby Labonte were sold on eBay - click here for more items.

Bobby Labonte's 1932 custom roadster crossing Barrett-Jackson block (07/29/14): Whenever you go a Barrett-Jackson auction there's always a NASCAR connection and this year's Reno event is no exception.

NASCAR Sprint Cup drivers Kurt Busch, Bobby Labonte and Trevor Bayne fighting to (02/19/14): Two former NASCAR champions and a recent Daytona 500 winner are among a dozen or so drivers facing an unsettled Thursday night at

Former NASCAR champ Bobby Labonte will try for another ride at Daytona (12/17/13): The 2000 NASCAR champion will be making his attempt in a second entry for the team recently acquired by Harry Scott from long-time owner James Finch.

NASCAR Bobby Labonte, Knocked out for 3 Weeks by Bicycle Injury (09/2013): Frank N. Darras, disability lawyer to the pros advises athletes: a rock-solid disability insurance policy will protect athletes' income, even if they get hurt outside their professions. (PRWeb September 24, 2013) Read the full story at http://www.prweb.com/releases/2013/9/prweb11157976.htm

NASCAR Daytona 2013: Bobby Labonte uncertain about future (07/2013): Driving Labonte's No. 47 JTG/Daugherty Racing car at Kentucky was AJ Allmendinger, who was signed for five races to help determine areas where the single-car outfit can improve.

NASCAR’s Bobby Labonte drives down memory lane before making 700th Sprint Cup st (05/2013): The former Sprint Cup champion on Sunday will become one of 14 drivers to reach the milestone. “It’s just an awesome accomplishment in this sport,” he said. “It’s hard to achieve in a lot of ways. I’m thankful to be able to get to that point.”

Mike Brudenell: NASCAR's Bobby Labonte lets his cars do the racing, not his mout (06/2012): Kurt Busch has monumental meltdowns on and off the racetrack. Bobby Labonte rarely raises an eyebrow with fellow competitors or team owners.

Bobby Labonte cycles for charity (04/2011): Bobby Labonte is hosting a cycling event to raise awareness of road safety and funds for local groups.

Toyota NSCS Las Vegas Notes & Quotes - Bobby Labonte (03/2011): How does it feel to be in the top-12 in points this season? "A lot of hard work by the guys at the shop. We have come off of the past two weeks have been a strong effort -- a good start to the season. We're looking forward to this weekend.